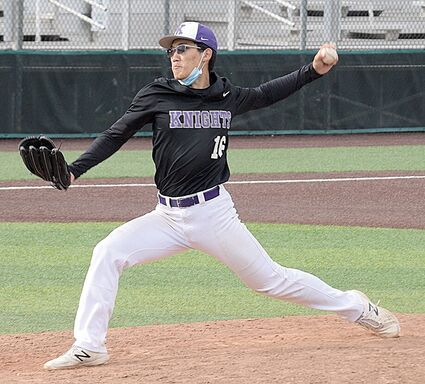 Kamiak's Sanha Oh came in and pitched two innings of scoreless relief against Everett Wednesday, May 5, at Funko Field in Everett.

It was feast or famine for Kamiak.

Two days after being shut out by Glacier Peak, the Knights' offense returned with a vengeance against Everett.

Kamiak pummeled the Seagulls for a season-high 18 runs to overcome some shaky pitching in an 18-13 victory Wednesday, May 5, at Funko Field, previously known as Everett Memorial Stadium.

Senior shortstop Leo Furlong-Benedetti, who was 2-for-3 with 3 runs and 3 RBI, said the Knights were fired up after the struggles against the Grizzlies two days earlier.

"I think we felt like we had something to prove today," he said. "It's a crazy game. We came out swinging. Our pitchers weren't on their game today. But it felt good to get the bats going."

Kamiak (8-5) jumped on Everett early, scoring six runs in the top of the first inning. Furlong-Benedetti hit a triple to drive in a run, and teammate Braeden Gee had a double to score a pair of runs.

But if the Knights thought they were going to coast to a victory, they were mistaken when the Seagulls responded with four runs in the bottom of the first inning.

The next inning, Kamiak answered with three runs to take a 9-4 advantage. Cayden Wotipka had a double to drive in a run, and Everett struggled with its control on the mound. Three Knights were hit by pitches. Two of the errant throws were with the bases loaded, resulting in two runs for the Knights..

Kamiak extended its lead to 11-4 with two runs in the third. Furlong-Benedetti drew a one-out walk and eventually scored when the Everett catcher threw to second base during a successful steal by Wotipka, who also scored on a subsequent throwing error.

"Our hitting was good enough to back up our pitching," Kamiak coach Clarence Trinidad said. "Our pitching wasn't very good. The bats came alive and kept up going."

The Seagulls cut the deficit to 11-8 with four runs in the fourth inning, and the damage could have been a lot worse were it not for junior pitcher Sanha Oh, who entered the game with the bases loaded and one out.

With a full count, Oh struck out the first batter he faced on a called third strike. He then again went to a full count before the next batter grounded out to shortstop Furlong-Benedetti to end the Seagull threat.

"I was just thinking, be a bulldog," Oh said. "Just see if you can get out of this. Attack the hitters. Don't be like, 'Can I throw a strike?' Be like, 'Let's see if they can hit this,' and it worked out."

"I just attacked them early," he said. "If they got down early, then I was able to get some pretty easy outs."

Oh pitched a scoreless fifth inning before being lifted in the sixth.

Furlong-Beneditti led off the fifth by hitting plunked by the pitcher. He eventually scored on a sacrifice fly by Oh, as Kamiak extended its lead to 12-9. The Knights added four more runs in the sixth to take a seemingly commanding 16-9 advantage. Furlong-Benedetti, Oh and Gee each drove in a run.

The Seagulls, however, refused to concede. Everett rallied for four runs, and the Knights were hanging on to a 16-13 lead. Kamiak added two more runs in the seventh with Jack Fenton and Furlong-Benedetti each driving in a run.

"When things are going good, we put up a lot of runs," Trinidad said. "They've been pretty steady all year. ... We like to run. The biggest thing when we're on base is we put pressure on teams."

After giving up a leadoff walk in the seventh, Kamiak reliever Christian Pedersen followed with three straight strikeouts to end the three-hour contest.

"You know when your pitchers don't have their best stuff, it's up the hitters," Furlong-Benedetti said. "They put up 13 runs. If we weren't hitting, we were going to lose that game. It's just good that the hitters, we realized as a group, that we've got to win this."

The senior shortstop was glad that he had the opportunity to play baseball one last time at Kamiak.

"It felt really good to play this year, especially after last year. I felt we could have had a really good team," Furlong-Benedetti said. "I felt bad for coach, his first year. I was happy to get out here and build relationships with the guys on the team, even if it's only a short season."

"It means a lot to establish a winning attitude with the baseball team," Furlong-Benedetti said. "We came into the season kind of unsure of how we were going to play."

Both Furlong-Benedetti and Oh credited Trinidad for playing a major role in Kamiak's success this year.

"He knows the game. He knows how to work with us," Oh added. "He's comfortable to talk to." 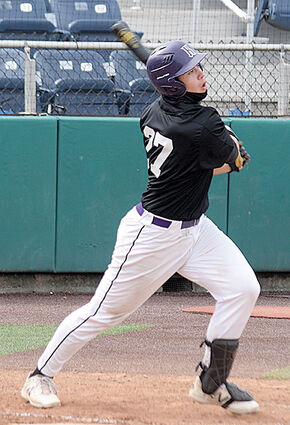 In his first full season with the Knights, Trinidad described the five-week, shortened season as a good learning experience for both coaches and players. He only knew a handful of the players coming into the season.

"We have a junior class that is bigger than the senior class," Trinidad said. "I feel really good about the junior class."

More than anything, Trinidad was hoping to bring back some of the traditions of Kamiak baseball. He is an alum of Kamiak.

"It should be a big thing to play for your high school," Trinidad said. "I think they took pride in what they were doing – playing for their community. I thought it was a good season."