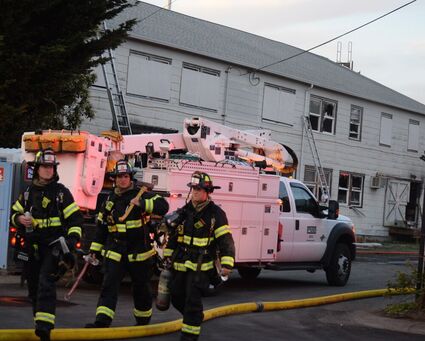 Firefighters leave the NOAA Mukilteo Research Station after putting out a fire that started outside a smaller one-story building next to the main two-story structure.

A fire at the former National Oceanic and Atmospheric Administration (NOAA) Mukilteo Research Station was quickly put out by the Mukilteo and Everett fire departments Friday, May 14.

The Mukilteo Fire Department received a call at 7:39 p.m. about a fire at 802 Front St. on the waterfront.

"The fire actually was outside the building, but it looked like it has been burning long enough that it burned into the building," he said

Smoke found its way into the two-story main building, requiring firefighters to force entry to determine if the fire had spread there, which it had not. Smoke and heat from the fire did reach the main building.

"We had to get the smoke out (of the main building) to figure out if there was a fire extension up there," Alexander said. "The bulk of the fire was out pretty quickly. The hard part was figuring out how far it went."

Mukilteo Fire Marshal Glen Albright said the initial investigation indicates that the fire is not considered suspicious. The Snohomish County fire marshal still had to make some phone calls to witnesses and talk to the overseers of the property, Albright said. The county's preliminary report is expected in about a week, with a more complete report due in about 30 days. 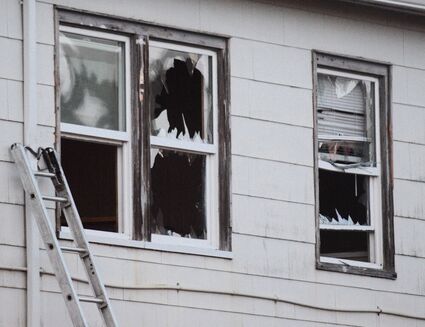 Fire crews gained access to the main building in order to determine if a fire in a smaller building on the east side had spread. It had not.

The building did have power and gas, and PUD personnel also responded. Alexander said that four engines, four ambulances and a ladder truck were on scene. There were no injuries reported.

"When the initial call comes in at the ferry dock, it gets a lot of attention," Alexander said.

The research station, operated by NOAA, has been located on the Mukilteo site since the 1970s, and NOAA took over ownership of the building in the 2000s. The building is more than 70 years old.

The research station was recently shut down due to building safety concerns. The aging facility is located near Ivar's and the Silver Cloud Inn, and close to the new Mukilteo Ferry Terminal.

Plans to construct a new building were canceled because the proposed costs have exceeded the funds budgeted for the project. The property is being transferred from the federal government back to the Port of Everett.