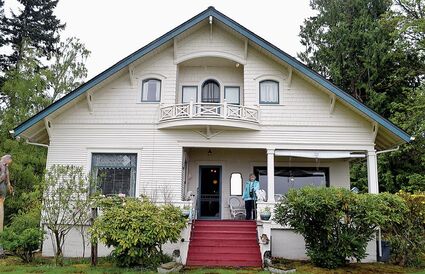 Kay Hogland Scheller stands on the back porch of Hogland House, one of four houses on the Mukilteo Historic Register of Places. Scheller operated a bed and breakfast out of her home until January 2020.

The last guest has checked out of the Hogland House bed and breakfast.

After more than 25 years of hosting travelers from around the world, owner Kay Hogland Scheller has hung up her apron for good.

Scheller's retirement from her innkeeper duties, however, has nothing to do with the coronavirus pandemic that has ravaged the travel industry.

Health issues forced Scheller to formally close what is regarded as a Mukilteo institution. Scheller, 84, suffered a stroke in January 2020, a few months before the start of the pandemic. After recovering, Scheller talked with her children and decided it was time to step away from her bed and breakfast business.

Scheller still lives in the five-bedroom house built in 1906, and situated on five and a half acres off of Webster Street.

Scheller owns and manages a number of rentals throughout Snohomish County.

"I've got plenty to do," she said. "My maintenance man is usually down here at 7 in the morning to say, 'What are we going to do today?'"

Scheller's parents purchased Hogland House in 1942. At the time, it housed a

World War II army hospital run by nuns. Scheller has fond memories growing up with her brother and sister. Many animals populated the grounds.

"There were chickens and rabbits," Scheller said. "My dad used to go out and kill a chicken or a rabbit, and that was dinner."

Food was somewhat scarce during World War II, she added.

Scheller attended Rosehill School, located on Lincoln Avenue. She then went to Everett High School and maintains ties with many members of her graduating class. An annual reunion with Scheller's classmates is scheduled for August.

Her parents, Valeria and Everett Hogland, lived in the house until their deaths. Scheller took over the house in 1987. Then in 1993, she decided to open a bed and breakfast out of the house. Scheller knew almost immediately that she had found her calling.

"I've always enjoyed getting to meet people," she said. "I met a lot of fantastic people."

Guests from around the world, from as far away as Japan, marveled at the turn of the century Victorian architecture and the breathtaking Puget Sound views from the back porch.

"Nobody has this kind of property with a historic home on it that overlooks the water," Scheller said.

Scheller served up breakfast every morning. The bed and breakfast was open seven days a week. With Scheller living upstairs, guests had their choice of two ground level rooms – the Lilac and Rose rooms.

Reviews were overwhelmingly positive as guests raved about the amenities, view of Puget Sound, and the TLC provided by Scheller.

One reviewer on Trip Advisor wrote, "Kay is very personable and makes you feel like family. By the end of your stay, you want to come back just to visit Kay."

Another guest wrote, "When it was cold and drizzly outside, the house was warm and inviting, as was the proprietor, Kay. She made three completely different, sumptuous breakfasts for us during our stay."

"It was fun," Scheller said of coming up with the different breakfasts.

Hollywood also found its way to Hogland House. An episode of "The Fugitive" television series and an H.G. Wells' "War of the Worlds"/History Channel production were shot at Hogland House.

A few years after the opening of the bed and breakfast, the City of Mukilteo's Historic Preservation Commission named Hogland House as the first historic house in Mukilteo. The house is one of four houses on the register. The former Boys & Girls Club is the fifth building on the list.

As beautiful as the exterior is, the interior of Hogland House also features an array of collectibles.

The oldest piece likely is a piano owned by Scheller's mother. She isn't quite sure just how old it is.

In addition to the annual Everett High School reunions, Scheller hosts what she describes as "dinner club," regular gatherings with her neighbors and friends.

The future of Hogland House is uncertain.

The house will go to Scheller's children. Two of her remaining three already are retired.

"I don't know what the kids are going to do," Scheller said.