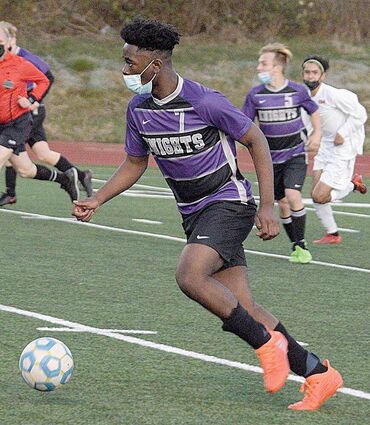 Kamiak's Glenn Wabaluku controls the ball against Monroe during a Wesco game.

Kamiak showed quite a bit of resiliency against Monroe.

The Knights fell behind twice and ended scoring two goals in the final 15 minutes to pull out a 4-3 victory over the Bearcats in a Wesco boys soccer clash Tuesday, April 13, at Kamiak High School.

Sophomore Tsuyoshi Kameda punched the game-winning goal with eight minutes left in the game to lead the Knights (3-1).

Monroe (3-1) took a 1-0 lead early in the first half before Kamiak junior Aidan Drought scored. Senior Alexander Hristov then gave the Knights a 2-1 lead with the first of his two goals. Monroe responded with a pair of goals to go into halftime with a 3-2 advantage.

"We showed some real resolve," Kamiak coach Kosta Pitharoulis said. "That was good to see. We really showed up and played the full 80, which is important. It's real easy to get down on yourself and not finish a game."

With 15 minutes left in the game, Hristov tied the score at 3.

"It seemed like a game of runs," he said. "They scored and then you scored. And they punched back. It was just a good old-fashioned primetime high school game. It was very fast paced. It was a great game to play and a great game to watch."

Kamiak started out slow in the first half, Drought said. "But in the second half, we dominated."

"We calmed ourselves, focused and we played Kamiak soccer," Hristov added.

It's taken some time for Drought to become familiar with his teammates. Teams only had a week of practice before games started. Drought said that he didn't know some of his teammates coming into the season.

"We've never met some of these players," Drought said. "It's just fun to see what they're made of."

He noted that an underclassmen scored what turned out to be the winning goal.

The Knights have found some common ground during a season consisting of five weeks with no postseason.

"Our coach summed it up perfectly. There's no state playoffs," Hristov said. "There's kind of nothing at the end of the season. So it's just all about playing for pride, and we want to put on for the town one last time."

"We are in it just for the love of the game," Drought added. "It means a lot. Soccer is my personality. Without soccer, I don't know where I'd be if I didn't have that pushing me." 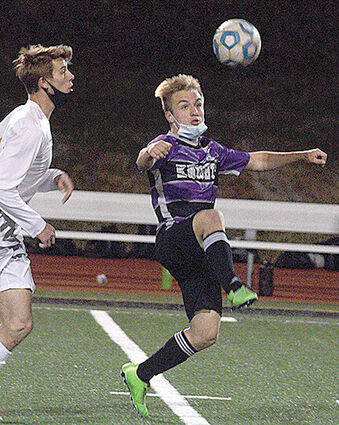 Many of the players on Kamiak and their opponents know each other well from their club teams. So the high school season is another chance to battle against friends.

"It's really about bragging rights," Pitharoulis said. "They know each other. This is something that they can remember – the year they wore masks. The year that they scored on their buddy or whatever. So we're trying to make some memories that way. I think the guys are pumped to play."

Pitharoulis and the seniors are extremely glad to be playing this year, especially since last year's seniors weren't able to finish their high school careers.

"That was a really good team primed to do something exciting," Pitharoulis said.

The 2021 squad is similar in those respects.

"I think these guys really want to take that mantle and have a really good season," Pitharoulis said.

"As a senior, I want to go out with a bang," Hristov said.