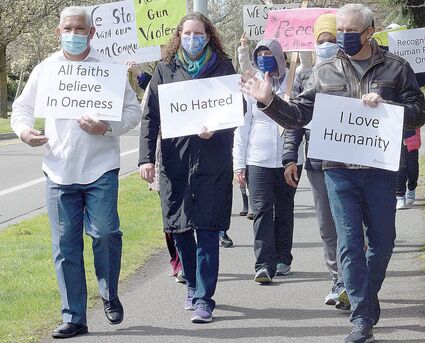 "We're just not being compassionate in allowing people to live on the streets," he said.

"One of the reasons I wanted to be out here is to raise awareness of those with mental illness and to get them the help they need and not just be abandoned," he said.

Fellow Councilmember Louis Harris came out to urge society to right the wrongs of the past. 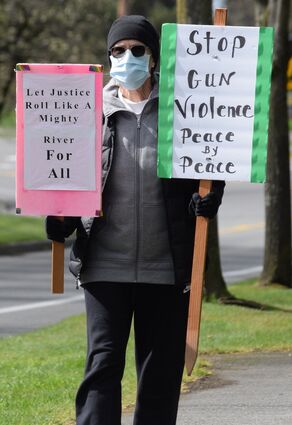 A Peace Rally supporter with signs.

"That means being more inclusive, recognizing the pain and the hurt that people go through, and addressing those things," he said.

"I saw that it (rally) was about gun violence, mental health, substance abuse, and just coming together as one," she said. "I'm really proud to be here and to support you guys in any way, and to stand side by side."

Islamic Center of Mukilteo President and Councilmember Riaz Khan told supporters he appreciated their attendance. He told them six or seven years ago he was at an airport in New York, and was praying alone at the counter. He opened his eyes to find himself surrounded by other people. "We are here to support each other," Khan said.