Kamiak shuts down Jackson in second half | Football 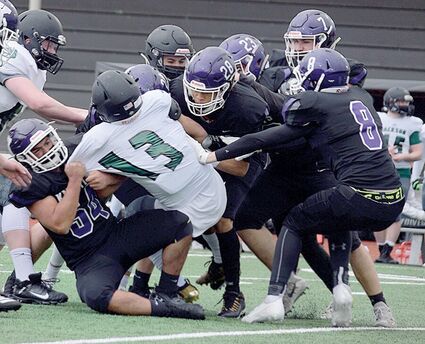 The Kamiak defense swarms all over a Jackson ball carrier Friday, March 19, at Goddard Stadium.

It took a while for Kamiak to get rolling against Jackson.

Four minutes into the second quarter, the two teams were deadlocked at 14. The Knights then scored 43 unanswered points to cruise to a 57-14 victory over the Timberwolves in a Wesco football game Friday, March 19, at Goddard Stadium.

Kamiak junior wide receiver Wesley Garrett ran for a touchdown, caught a pass for score and returned a punt for a TD. He finished with 61 yards on five carries, and caught two passes for 69 yards. Garrett gave the Knights a 7-0 lead when he returned a punt 59 yards for a score in the first quarter.