Kamiak senior named one of WIAA's Athletes of the Week 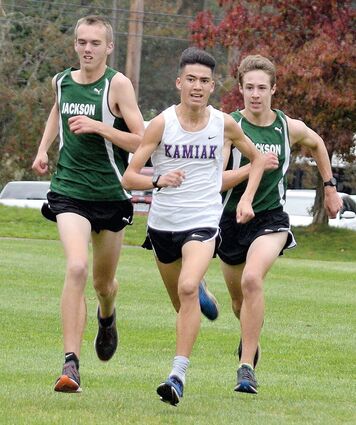 Kamiak's Carp Mukai, seen here in 2019, will be continuing his running career at Gonzaga.

Like many seniors during the coronavirus pandemic, Kamiak's Carp Mukai found himself questioning things in his life.

The postponement of the cross country season last fall left him a little bit in limbo as far as training and his potential future in the sport.

"Either you put it away or you embrace it," Mukai said.

Mukai embraced the sport and, as a result, is having the best season of his cross country career. Mukai spent most of time training by himself with only an occasional group run with teammates.

The WIAA recently named Mukai as one of its Athletes of the Week for Week 4. The Kamiak standout is currently tied for 11th in the state after running a 5K personal-best in November of 15 minutes, 28 seconds. In a recent win over crosstown rival Jackson, he posted a 4,000-meter time of 12:39.

He is also a member of the Unified basketball team, Leadership and Young Life. He'll attend Gonzaga next fall, where he'll run for the Bulldogs.

"I was surprised. I'm just really thankful," Mukai said of the statewide recognition. "My hard work is starting to pay off."

Mukai said that his training and running has taken off to a different level this year. The lack of a postseason is disappointing, especially since Mukai said that a top 10 finish at the state meet was a strong possibility. Mukai finished 52nd at the 2018 state meet and helped the Knights qualify as a team.

"At first it was really hard that there was no postseason," he said. "But I'm just glad and thankful that we do get to race."

Mukai won his last home meet last week, completing the 2.7-mile course in 13:45. Kamiak is scheduled to wrap up the season at Mariner on Thursday, March 25.

The prep track and field season kicks off next month. Mukai will continue his running career at Gonzaga. He met coach Pat Tyson at a camp and came away impressed.

"He's one of the best coaches in the nation," Mukai said.

Mukai talked with about six or seven other schools before deciding to become a Bulldog.

"The team culture is unmatched," he said. "None of the other schools had that."

Mukai had long thought about running in college, but didn't really know how good of a runner he could be. During his freshman year, he was told that he could be pretty good. Even though he said his performance at state his junior year wasn't his best, Mukai started to really enjoy running.