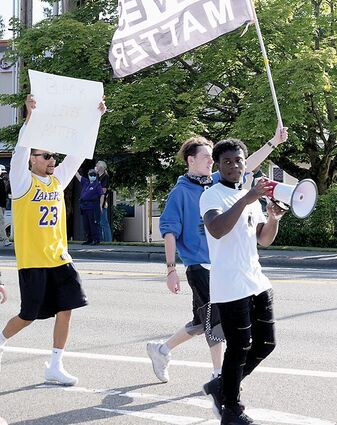 Kamiak graduate Josh Binda (right) was one of the organizers of the Mukilteo Peaceful Protest, a march promoting racial equality and social justice in the aftermath of the death of George Floyd. Binda is seeking a seat on the Lynnwood City Council.

Josh Binda is hoping to make history in next November's general election.

The Kamiak High School graduate formally filed with the state in late February to run for a seat on the Lynnwood City Council.

If elected, Binda, 21, said that he would be the youngest African American elected to public office in the state.

Binda said he had been contemplating a run for the Lynnwood City Council since last summer, after he helped organize, along with fellow Kamiak graduates Alex Callaway and Jordyn Porea, the Mukilteo Peaceful Protest. The June 2020 march championed racial equality and social justice in the aftermath of the death of George Floyd.

"It started off with Black Lives Matter. I just realized how important it was for young people to step up to make a difference, not just for Black people, but for all people," said Binda, who lives on the border between Lynnwood and Mukilteo. "I want to make Lynnwood feel like a home for people of all walks of life."

Though he's only 21, Binda said that he has the experience to be a city leader.

"I've always been in a position of leadership," he said.

Binda was appointed by Mayor Nicola Smith as a member of Lynnwood's Diversity, Equity and Inclusion Commission. He volunteers at the Lynnwood Food Bank. He will be studying political science at the University of Washington Bothell.

At Kamiak, Binda was a captain on the football team and ASB president.

Age will not be a factor in his campaign, Binda contends. He has been buoyed by the reaction to his announcement.

"I've had so much support," Binda said. "People realize that no matter my age, my experience speaks to them. I'm hearing so much positive feedback. I'm not focused on my age. I want to focus on all demographics."

Binda already is delving into what he considers important city issues. He wants to rebuild public safety for both older adults and younger people. He's committed to promoting low income housing in Lynnwood, which he said will benefit the city.

"It will bring more diversity and more inclusion," he said.

Lynnwood is generally known as a retail center, and not as a community center, Binda noted.

"We should have more gatherings in the community," he said.

Binda is committed to not raising taxes. His focus is on budgeting and prioritization of resources.

"I want to make sure tax dollars are being used for the right things in the city," he said.

Binda is a first-generation American. His parents emigrated from Liberia to flee a dangerous war. They won an international lottery, and picked the United States to be their new home. Binda grew up in a rough neighborhood in Providence, Rhode Island, where he said violence was commonplace. The family eventually moved to Washington and settled in Lynnwood when Binda was 13.

"It changed my life," Binda said of the move. "But I wouldn't take back any of the hard experiences I had. That made me the man I am today."

Binda's parents continue to inspire him.

"I've learned work ethic from them. I've had life experiences," he said. "My heart is with the community. I'm ready. I know I'm ready."

Attending Kamiak and living in the Pacific Northwest was quite a culture shock for Binda.

"It stood out to me that I was different. I stood out," Binda said. "For the most part, Mukilteo was very accepting to me. But there were definitely times when I felt out of place because of my race."

Binda's skills as an athlete helped him feel more comfortable at school. However, he said that his experience as a standout athlete might differ from what other African Americans students faced.

Binda is excited to get out and talk with people. He is looking forward to the campaign.

"I want to knock on doors. I'm very social. I love to be with people in the community. It feels so natural," he said. "It's what I care about. I'm very prepared. I want to win this and make history." 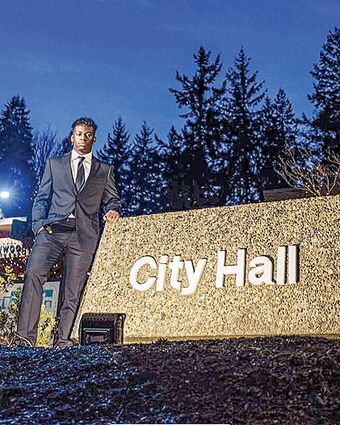 Kamiak graduate Josh Binda is running for a seat on the Lynnwood City Council.

And if Binda has his way, he won't be the only young person engaged in public service.

Many high school students marched in the Mukilteo Peaceful Protest, which had about 1,000 supporters. The turnout surprised Binda.

"We didn't expect that many people," he said.

The backing from Mayor Jennifer Gregerson and city council added fuel to the fire for Binda.

"In order to create real change you have to deal within the system. Black, White, all lives. That's very important."

Josh Binda will be having a virtual campaign launch party at 7 p.m., March 25. For more information see https://www.joshbinda.com/