Temperatures warm up just in time for the workweek 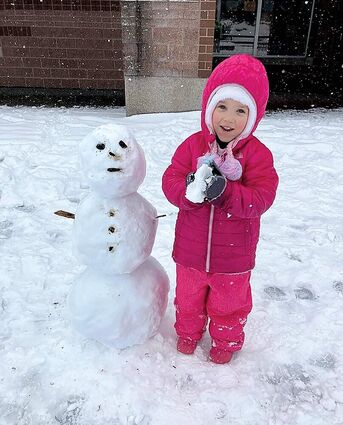 Lily Taylor, 4, was hard at work building her snowman during last weekend's snowstorm.

Mother Nature got it right this weekend.

The much-anticipated snowstorm of 2021 descended on Mukilteo and the rest of Snohomish County late Friday night and continued through much of Sunday. Snow totals ranged from 8 inches near Olympic View Middle School to 10 inches close to Lake Serene to more than 12 inches elsewhere in Mukilteo.

Many families headed out the door to play in the snow. Parents and children weren't the only ones to enjoy the white stuff, as many dogs joined in on the fun.

Temperatures warmed up and the snow turned largely to rain by Sunday evening. On Monday, the majority of the main roads were clear just in time for commuters to head back to work, though many were off for President's Day.

"I thought the response to the storm went very well," Mayor Jennifer Gregerson said. "We did not have to close any roads, and we were able to keep our priority routes passable."

Gregerson added that in partnership with the county, crews were able to get anti-icing done in advance, as well as applying salt on corners, intersections, and hills. That helped the city keep the main routes from getting too icy.

The fire department responded to 15 calls from late Friday through Sunday night, a higher number than normal.

"Most were medical calls, as would be expected," Fire Chief Chris Alexander said. "There were several automatic alarms related to sprinkler systems reacting to the cold weather.

"The fire crews had the expected challenges navigating the streets during the snow. The public works crews did an outstanding job clearing streets and supporting our ability to respond."

Police Chief Cheol Kang said that the storm didn't have too much of a direct operational impact on the department. He also credited the work of public works.

"I have to say that a lot of the thanks is due to the public works crews, who were out all weekend plowing the main arterial roadways," Kang said. "They did a great job."