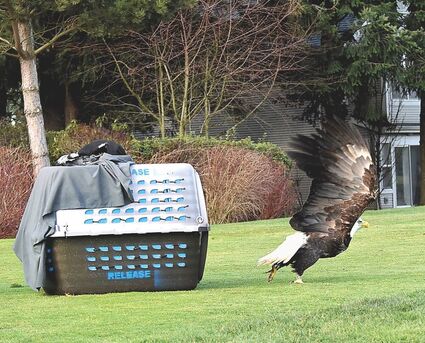 A male bald eagle gets a running start after he is released at the Harbour Pointe Golf Club. The eagle spent two weeks recovering from injuries at PAWS' Wildlife Center in Lynnwood. The bird likely suffered injuries from a fight with another male eagle.

He didn't hesitate for a second.

As soon as Progressive Animal Welfare Society (PAWS) naturalist Jeff Brown opened the door to the pet carrier, the eagle jumped out, spread its wings and immediately took flight, ending up on the branch of a farawa...