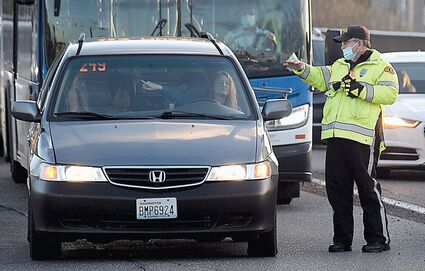 A driver stops to talk to a traffic control officer while on her way to the new Mukilteo ferry terminal Friday, Jan. 15. Motorists can expect more traffic signs directing them to the new terminal.

By most accounts, the new Mukilteo ferry terminal is a hit with residents and commuters.

The new passenger terminal with tribal influences and art has been described as beautiful and unlike any of the state's other terminals.

But that doesn't mean there haven't been some snags in the opening of the state's first new ferry terminal in 40 years.

Drivers currently access the new terminal, located a third of a mile east of the old terminal, through a temporary road off of SR-525....

Well written article, but what it neglects to mention is an issue that is very important to Mukiteo residents, is the lack of code enforcement by the MPD and WSP of the posted speed limits on the SB portion of the Speedway. While this issue has been an ongoing well before the new terminal, now is the time for our elected officials to reinforce the law and expectations. The traffic on the Speedway already divides our beautiful city, but the speed limit violators make it worse.