Residents, council want to discourage ferry commuters from using street as a shortcut 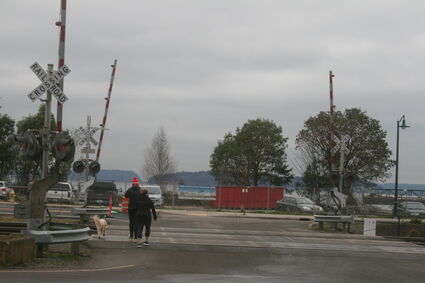 Councilmember Joe Marine proposed that the city work with Burlington Northern to close the railroad gates to the Mount Baker crossing.

One way or another, the city of Mukilteo appears ready to address Mukilteo Lane residents' concerns about the possibility of additional traffic on their street from ferry commuters.

Mukilteo Lane residents have long expressed concerns that the opening of the new ferry terminal would lead to increased traffic on Mukilteo Lane, as ferry commuters would use that street as a shortcut, instead of heading to SR-525, which is where they are supposed to go for both loading and unloading.

During the Dec. 7 City Council meeting, Councilmember Joe Marine proposed that the city work with Burlington Northern to close the railroad gates at the Mount Baker crossing in order to block ferry traffic from heading out on Mukilteo Lane from First Street.

Marine's motion generated some support among his colleagues, but was postponed until Jan. 4. An amendment by Marine tied the closure of the Mount Baker crossing to the opening of First Street, which is currently closed.

Marine said his motion, which was proposed at the end of a long meeting, was made more out of frustration and a desire to prompt the city to come back to the council with some options.

It seems to have worked.

Mayor Jennifer Gregerson said that city staff is working on the issue and plans to have an answer at the Jan. 4 council meeting.

"Our goal is to present a single recommendation that we believe addresses many of the concerns that we've heard," she said. "We want it as low-cost as we can make it."

Marine is adamant that the city needs to act.

"We need to make a decision," he said. "When the ferry terminal is open, we can't have a bunch of cars driving down Mukilteo Lane."

The closing of the gates at the Mount Baker crossing makes sense to Marine.

"This is something easy to do. It costs nothing. It's quickly reversible," he said. "It stops that problem, and at least gives us time and some motivation to get this figured out."

The concern of Marine and residents is that people heading north will discover they don't need to drive to the Mukilteo Speedway, and instead can exit to the Mount Baker crossing and then on to Mukilteo Lane.

Other non-ferry traffic also might be tempted to use Mukilteo Lane. The Sounder Commuter train station and parking lot is close to the new terminal. A multimodal parking lot for ferry employees, buses and vanpools, Uber and other vehicles that can drop off or pick up commuters is located on the east side of the terminal.

Former mayor and 40-year Mukilteo Lane residents Emory Cole and his wife Molly noted that residents have previously advocated the closing of the Mount Baker crossing.

"The key is to prevent any waterfront-related traffic from having access to Mukilteo Lane via the Baker railroad crossing," Cole said. "It would require all vehicle traffic to access the waterfront area via SR 525, the Mukilteo Speedway."

In a Dec. 27 letter written to the council on behind of residents of Mukilteo Lane and the surrounding community, the Coles said they and their neighbors were concerned about adding more traffic on "a substandard narrow street that is used by many pedestrians, lacks sidewalks, and has a history of landslides."

The Coles added that, "It is not our intention to eliminate public access to the Mukilteo waterfront or Edgewater Beach but to better control traffic to make it safer for pedestrians and extend the life of the street."

In the letter to the council, the Coles offers different suggestions, in addition to the closing of the gates at the Mount Baker crossing. The closing would affect vehicle traffic, but still leave access for pedestrians and bicyclists.

One scenario is to block Mukilteo Lane on the east side of the Mount Baker crossing with an emergency vehicle crash gate at the bottom of the hill. This device would allow emergency vehicles to access the residential neighborhood in the event access was blocked from Mukilteo Boulevard at the top of the hill. Another proposal is to turn Mukilteo Lane between the Mount Baker crossing and Mukilteo Boulevard into a one-way street going uphill. This lane would be on the south side of the street in Mukilteo. The north side of the street, which is in the city of Everett, would then become a pedestrian lane along the bluff. 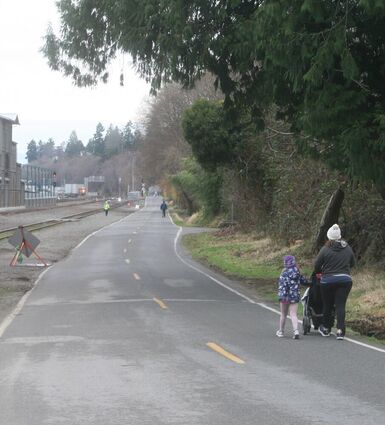 Residents on Mukilteo Lane want the city to find a way to discourage ferry commuters from using Mukilteo Lane as a shortcut to avoid the Mukilteo Speedway.

Marine said that since part of Mukilteo Lane is in Everett, Mukilteo needs to work with its neighbor to the north.

The Coles said that residents also have requested that the city install speed humps to deter speeding and drag racing on Mukilteo Lane. Councilmember Riaz Khan made a motion to install speed humps, but was unable to garner support among his colleagues.

Khan indicated that he plans to raise the issue again, and also wants a traffic calming study done on the street. Gregerson said that the city currently has no traffic calming requests regarding Mukilteo Lane.

Previous attempts by residents to engage the city did not yield any solutions or actions, Cole said. He is more optimistic that the issue will be dealt with by the current council.

"I think they're more aware, more cognizant of the problem, particularly the newer members."