A special delivery for a Mukilteo couple 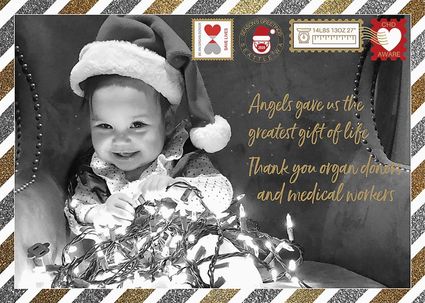 Photo courtesy of Sonja and Aaron

Sonja and Aaron's daughter underwent open-heart surgery shortly after her birth. She is doing fine now and is expected to live a normal life.

Thanksgiving was an especially meaningful time for first-time parents Sonja and Aaron.

The Kamiak High School graduates spent the day giving thanks for and enjoying their eight-month-old daughter.

"She's so happy, loving and sweet," Sonja said. "She's an easy, carefree baby. She loves to eat. She loves the dog and cat. She's got us wrapped around our fingers."

Six months into their pregnancy, Sonja, 32, and Aaron, 34, didn't know if they would be able to spend Thanksgiving with their daughter.

Instead, they were faced with the heart-wrenching news that something was wrong with their baby.

In December 2019, Sonja underwent an ultrasound test that revealed that her baby had an anomaly that turned out to be congenital heart disease (CHD).

The condition is the most common birth defect, affecting one in every 100 pregnancies. Sonja and Aaron's baby was suffering from persistent truncus arteriosus, an especially rare form of CHD that affects one in every 33,000 pregnancies.

Their daughter had no known cause of the condition even after extensive genetic testing, and it requires lifelong treatment.

Sonja and Aaron requested that their last names not be used and that their daughter not be named, both for privacy concerns.

The news was a crushing blow to Sonja, and put a huge damper on her pregnancy. She admitted that she was scared to get attached to the baby.

"Most people would be planning a baby shower or decorating a nursery," Sonja said. "For us, it was figuring out what we can do to save our child's life."

"There was no hope," Sonja said.

Sonja and Aaron refused to accept that message. Even though her doctor advised her not to do her own research on the internet, Sonja didn't take the doctor's advice.

"That was the best thing I ever did," she said. "You have a huge love of your child. You want to do anything you can to fix what's going on."

What Sonja found on the internet was support from other parents and, most importantly, hope.

A posting on a Facebook group quickly drew 80 responses.

Sonja and Aaron changed doctors and ended up at Children's Hospital in Seattle. Three doctors came to see them with the news that the baby had persistent truncus arteriosus.

"The first question was 'Can you fix her? Can you save my daughter?''' Sonja said. "They said, 'Yes,' but it required surgery and they didn't know how many surgeries."

Overwhelmed by emotions and looking for some clarity, Sonja turned to her husband.

"This is our daughter. We need to give her a chance," Aaron said.

Sonja breathed a sigh of relief.

"Yes, I married the right man," she said to herself.

After extensive research, Sonja and Aaron decided to have their daughter treated at Boston's Children's Hospital. Sonja relocated to patient housing in Boston in early March when it became increasingly apparent that the coronavirus pandemic was going to be creating chaos throughout the country. Aaron soon followed.

Sonja and Aaron's baby was born March 31, baptized April 1 and underwent open-heart surgery April 2. The baby was discharged April 18, and Sonja, Aaron and the baby flew home on a private jet through a generous benefactor six days later.

"Everything went without a hitch," Sonja said. "We had the greatest gift of planning."

The detection of the anomaly during the ultrasound by the sonographer proved critical.

"She was very adept at her job," Sonja said. "If it wasn't for that woman, the story might be different. We might not have a living child."

Sonja noted that the son of ABC talk show host Jimmy Kimmel also has CHD, but the condition wasn't detected until after he had been born. Sonja also found out that Olympic Gold Medalist snowboarder Shaun White was born with a congenital heart defect and had two open-heart surgeries before the age of 1.

Through social media, Sonja met two women with the same heart defect as her daughter. One of them ran in the Boston Marathon.

"It was a life-changing experience," she said. "They were two women my age. They have congenital heart disease. It really put things into perspective. They are two fantastic women. They are happy, grateful. They don't know anything different. They love life.

"Having people with the condition tell you what it's like offers peace of mind."

Sonja and Aaron's baby received a heart valve from another pediatric patient. The two don't know who the donor was.

"It's really overwhelming," Sonja said. "Even at Thanksgiving, we have this child in a high chair. A year ago December, we didn't know if she would be here with us.

"It's very humbling to know another family gave the ultimate sacrifice."

Sonja found out that only 17% of families who lose a child are interested in learning about organ donation.

As a result of her daughter's treatment, Sonja has become a vocal advocate of organ and blood donation. Sonja and Aaron are now regular blood donors after being unaware of how great the need is. Sonja also stresses the importance of the Affordable Care Act and how it ensures that insurance companies can't discriminate against those with preexisting conditions. The act also eliminates the lifetime cap that some insurance companies used to impose. 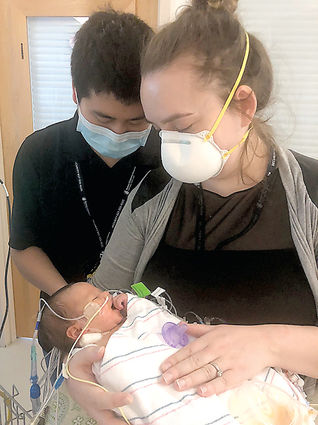 Photo courtesy of Sonja and Aaron

Mukilteo residents Sonja and Aaron (left) hold their daughter for the second time in her life – nine days after her birth and after her open-heart surgery.

"Access to health care needs to be an issue for everybody," Sonja said.

Sonja had a new perspective on life because of her daughter and what she's had to go through in her short life. Aside from future surgeries, Sonja and Aaron's baby should have a normal life.

"Every day is a gift. There are no guarantees or promises to everyone," Sonja said. "We don't know what the future holds for any one of us."

The everyday complaints of life, such as the discomfort of allergies or the desire to lose a few pounds, no longer occupy Sonja's thoughts.

"That's nothing compared to what these heart warriors are going through."

This story was edited to clarify some details in an earlier version.