Edmonds artist selling his works in December at Cole Gallery 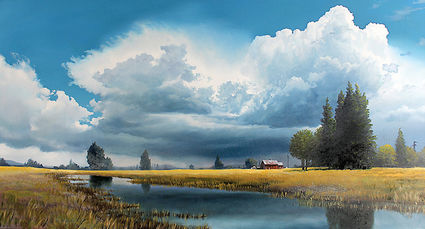 "On Reflection," by Andy Eccleshall.

Edmonds artist and muralist Andy Eccleshall will have a month-long show at Cole Gallery in Edmonds in December.

There will be no opening reception, due to COVID restrictions

Also showing during the month will be Michelle Waldele-Dick.

Eccleshall said the exhibit, "Head in the Clouds" is a celebration of light and a journey through an unusual year.

The idea for this show began over a year ago in Albuquerque during a hail and lightning storm, which had him frantically looking for cover. His work "Noon-Jemez Pueblo" is the first glimpse he had of that storm as he made his way east towards the Valles Caldera National Preserve.

"My thought at the time was to create a collection of pieces from up and down the west of the country, focused on cloud formations and weather patterns," he said.

"As we all know, the year took a very different turn and, as time progressed, many of us found ourselves closer to home and more introspective. The collection evolved in the same way.

"As I look through the work now, I am reminded of where my head was at with each piece, largely in the clouds but in a different way than what was originally intended. Finding inspiration on my own doorstep (and in the backyard). Looking for opportunities when the sky is talking and the day lends itself to watching the weather. 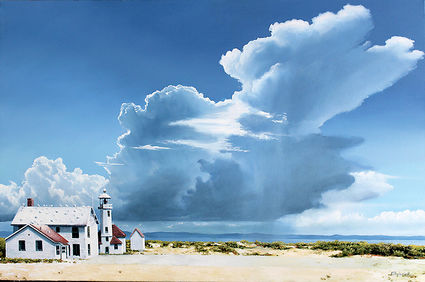 "Taking time to be OK with just being quiet, and listening to the silence of a misty morning. The year has taught us all to reconnect with what we love and hold it close. It's refocused our minds on the blessings we have. On our families and friendships. And to notice the beauty that's right outside the window.

Meanwhile, Eccleshall's next mural project will be on display in Petersberg Alaska, to be done on nine 10-by-5 aluminum panels in his Edmonds home and shipped to Alaska in the new year.

Eccleshall's latest public project in Edmonds, two new murals in the south alley on Main Street between Fourth and Fifth avenues, is called "Before Edmonds."

He collaborated with Tulalip artist Ty Juvenil on the project.