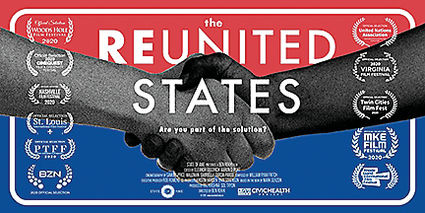 In the wake of one of the most divisive elections in United States history, the League of Women Voters of Snohomish County and the Seattle-Everett Braver Angels Alliance are working together to promote unity and healing.

The two are sponsoring an online discussion of the documentary "The Reunited States," a film that profiles bridge builders helping Americans heal across political and racial divides.

When participants register at Eventbrite ( https://bit.ly/3lgLemT ) they will receive a link to view the documentary on their own and a link to join the online discussion, scheduled for 6-7:30 p.m. Friday, Nov. 13.

Based on the book "The Reunited States of America: How We Can Bridge the Partisan Divide" by Mark Gerzon, the documentary follows four people on a journey to discovery how each can work to heal the divisions that have been created over time.

The film's director, Ben Rekhi, and two of the cast members, Susan Bro and Erin Leaverton, will join the online discussion.

Earlier this year, the League of Women Voters of Snohomish County and Seattle-Everett Braver Angels Alliance worked together on a workshop on promoting civic discourse. Braver Angels is a grassroots, nonpartisan organization dedicated to ending political polarization.

"We are trying to build a house united with liberals and conservatives," said Seattle-Everett Braver Angels Alliance co-chair Mary Beth Stibbins, a Mukilteo resident. "We're trying to find common ground. This election has really highlighted the polarization and division in our country. We're working to reunite folks.

"The foundation of our activity is patriotic empathy. Our love for our country is shown by our concern for our fellow citizens. We try to understand the other side's point of view, even if we don't agree. We're not trying to change anyone's mind."

League of Women Voters of Snohomish County President-Elect Karen Crowley describes the documentary as hopeful. The four people profiled are willing to do the work to try to understand their fellow citizens and listen to each other.

"We're living in a frightening time in terms of challenges to our democracy," Crowley said. "I'm hopeful of our capacity to move ahead and find hope."

Crowley shares the concerns of many about which direction the country is headed.

"We're very concerned that we've lost the ability to see ourselves as citizens," she said.

Many lessons can be learned from the film, Crowley added. One of the stories focuses on a mother whose daughter was hit and killed by a car during a demonstration.

"This is a woman, who has taken that incredibly painful event and turned it into an opportunity to really challenge us to listen to each other and to stop the hate," Crowley said. "That is incredibly compelling. ... I can't think of anything we need more of."

The documentary also follows a political operative who previously worked to raise people's fears and divide the country.

That person began traveling the country and hearing different stories from people.

"You see someone, who is curious and is reframing their world view," Crowley said. "Those are two people, who have incredible courage. I encourage you to watch the documentary. It just shows us what's possible."

"Both sides have had a lot of fears and a lot of contempt and criticism that's been amplified by social media," she said. "Everyone has been under so much stress – political, economic, isolation, concern about health. It's been sort of a perfect storm."

Stibbins said that "The Reunited States" comes at the right time.

"We need some hope," she said. "This is all about connecting rather than dividing. It's about building trust, encouraging respect and thoughtful dialogue."

Both Stibbins and Crowley are convinced that if people dig deep enough, they will find that they have more in common with their political adversaries than not.

"The hope is we just stop seeing each other as enemies because we're not. We have to find some way to come back together," Crowley said. "We think there's a yearning for people to be able to, at least put down their gloves. Can we please put down the gloves and realize that we're all in this together? It sounds trite, but it's very real."

"What I find is when people come together with an open mind, an open heart in the same room, in the same Zoom meeting, it's hard to hate someone up close," she said. "You come to realize that you often have a lot of values in common, such as wanting a better life for your children. Bridge building is possible. It's happened, and it's to be inspired."

To obtain links to view "The Reunited States" and participate in the online discussion go to https://bit.ly/3lgLemT. More information about the League of Women Voters of Snohomish County can be found at https://lwvsnoho.org. To contact the Seattle-Everett Braver Angels Alliance email [email protected] Information about the national organization can be found at braverangels.org.