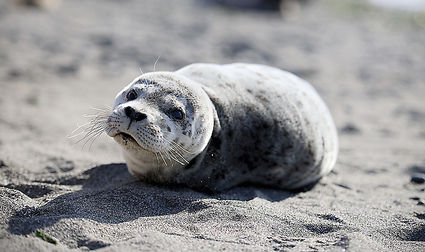 A harbor seal pup showed up at the beach at Lighthouse Park Sunday, Oct. 25.

An unexpected visitor dropped by the beach at Lighthouse Park Sunday, Oct. 25. An unattended harbor seal pup was hanging out, likely waiting for its mother to return.

The National Oceanic and Atmospheric Administration (NOAA) advises people to keep their distance from pups. The best thing you can do is to leave the animal alone, the administration says. 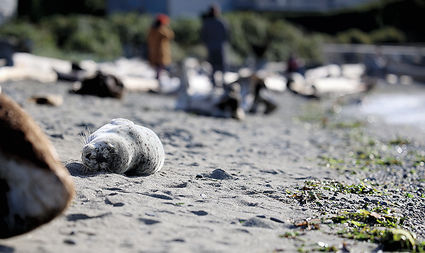 People should keep their distance from any harbor seal pups they encounter, according to the National Oceanic

Harbor seals and all marine mammals are protected by law under the Marine Mammal Protection Act. Federal marine mammal regulations prohibit harassing or capturing seals on shore to reduce human disturbance of important life processes. Feeding seals in the wild is also prohibited and is considered harassment.

Harbor seals are the most common marine animals in Puget Sound. It isn't unusual to see a seal resting alone on the shore.

If a pup is approached by a human, the mother will be able to observe and may not return.

A period of 24 to 48 hours is recommended to determine whether the pup is being attended to by its mother.

Up to 50% of pups born will not survive their first year of life.

If a pup is seriously injured, call the NOAA at 1-866-767-6114. People also can contact the Seal Sitters Marine Mammal Stranding Network, a volunteer group dedicated to the protection of marine mammals, at 206-905-SEAL (7325).