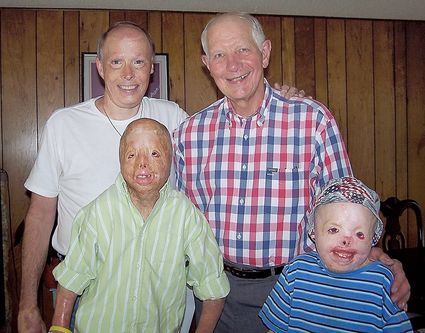 Michael Mathis has always been a fighter.

That was never more evident than when he was 11 and nearly lost his life in a horrific accident at a friend's house near Paine Field.

Mathis went to spend the night with his friend. The two were camping outside. Because it was cold, Mathis' friend went to pour some gasoline on a campfire.

Suddenly and without warning, the gasoline can exploded: Mathis saw a big flash that knocked him to the ground.

"I thought I was laying in fire," Mathis said. "The gas blew up on me. ... I was watching the skin melt off of my arms. I knew I was in shock. I didn't feel any pain."

The young boy, who had just received a Little League all-star award as a catcher and who dreamed of playing professional baseball, miraculously survived.

Sixty-five surgeries followed, as Mathis grew up. In spite of all the medical hardships, he managed to rebuild his life. Mathis graduated from Meadowdale High School, went to college, and joined the Air Force. He later worked at Boeing.

As an adult, Mathis often visited children with burn injuries in hospitals.

"I was letting them know my story, and that there is life after burns," Mathis said.

Misfortune struck again when Mathis was badly injured in an accident at Boeing. He was in the hospital with a broken back, and asked his father what he was going to do with his life.

"Why don't you start a foundation?" Mathis' father said.

The foundation celebrated its 30th anniversary last December and had big plans for 2020 that included hosting its annual Camp Phoenix, where children recovering from burn injuries have the opportunity to meet other children, who share similar feelings and experiences.

Then the COVID-19 pandemic hit and the entire country shut down. Like many nonprofit organizations, funding for the Burned Children Recovery Foundation dried up.

"It kept getting worse," Mathis said.

The foundation sent out a fundraising appeal on social media, telling supporters they might have to shut down.

Rick Koch, owner of All City Fence Company, happened to find out about the foundation's financial woes and decided he wanted to help.

Supporters contributed $17,500; Koch matched the amount. As a result of people's generosity, the foundation will be able to maintain operations through the end of the year.

Drivers who pass by All City Fence's new location on Mukilteo Speedway can see the foundation's fire truck, which will be on display on the company's property.

The foundation likely will continue to have financial challenges in 2021.

"It's a real thing. We get up every day thinking we may have to close," Mathis said. "Children will still get burned without our services."

But he said he's determined to make sure Camp Phoenix returns in 2021.

Camp Phoenix is a big part of the foundation's efforts.

"It's a place where kids come together and share their emotions and spirit with each other," Mathis said. "They don't feel alone."

Speaking from personal experience, Mathis said that when you are scarred from burn injuries, you do feel you are alone in this world.

Mathis is especially proud that many campers come back as adults to be counselors and teachers.

"They have a feeling of purpose," he said.

The foundation also provides funding for a number of burned support services. They include transportation, meals and lodging costs for medical appointments or surgeries; financial assistance for out-of-pocket expense medical costs and counseling; a toll-free burn survivors helpline; school re-entry program that prepares the school so the child can return to a safe environment; funds for clothing that helps to build self-esteem in the child; and costs for activities and hobbies outside the home that prevents reclusion.

"Families disintegrate. One parent blames the other and can't deal with it," Mathis said. "Over 90% of our families are single-parent."

Parents often lose their jobs. Many who attend Camp Phoenix are treated at Shriners Hospitals for Children, which provide care regardless of the family's ability to pay.

Through the years, 23 camp attendees died by suicide and many others have attempted it. The foundation's support line is there for those who are struggling.

Mathis' father played an important role in his recovery. One day Mathis came home feeling especially down because some of his classmates called him Frankenstein.

The first time Mathis looked at his burned face was a month after the accident, when he was in the hospital. He saw his reflection on a chrome lid.

They replied, "Your family. You'll have friends. No matter what, you'll have family and friends and life will go on.

"They taught me a lesson. You can overcome. Don't take yourself so seriously. The world's not about you."

Mathis tries to warn burn survivors that people often are going to react badly when they see them. Many children with burn injuries are bullied at school because of their physical appearance.

"People will crowd around and say, 'What happened to your face?" You're going to run into those problems. You can make a choice, turn around and run away, or you can turn around and talk to them like any normal person."

They can say that nothing is wrong, but that there is something wrong with that individual's reaction.

Oftentimes that person goes home, reflects on their actions and says "'What an idiot I am.' They see you and they'll respond without thinking. Sometimes the dialogue that comes out is pretty harmful."

Mathis' advice for those who run into a child with burn injuries is to reach out to them and their families.

Walk up to the parents and ask them what happened to their child, he suggests.

Know that a negative comment might cause a child to hide for the rest of their lives.

"Your reaction might be the last straw," Mathis said. "Tell them you're proud of them. They're doing a good job and just keep going."

The foundation's ultimate goal is to help families know that there is hope. But children have to realize their lives are forever changed.

"You have to reinvent your life. It's a new beginning," Mathis said. "There are a lot of problems when you fight yourself, trying to get back to the person you were. That person is gone.

"They don't see what they used to see in the mirror. How are you going to love that person? There are other ways to feel good about yourself besides the reflection in the mirror."

Mathis, 66, never saw his friend after the accident. The friend, who suffered burns on 20% of his body, and his family moved away.

From time to time, Mathis has attempted to track him down without any success.

"I feel bad. I wanted him to know that this was not your fault. You were just a child," Mathis said. "I hope he doesn't relive it. I don't hold any grudges."

Michael Mathis suffered severe burns as a result of a campfire acciden when he was 11.

In a way, the accident gave Mathis a purpose in life – 30 years running the Burned Children Recovery Foundation.

"I've had a great life. Kids. I've had a lot of successes. Relationships. Love and caring. I've surrounded my life with positive people."

To find out more about the Burned Children Recovery Foundation see https://www.burnedchildrenrecovery.org/