All of Mukilteo's favorites remain on the menu 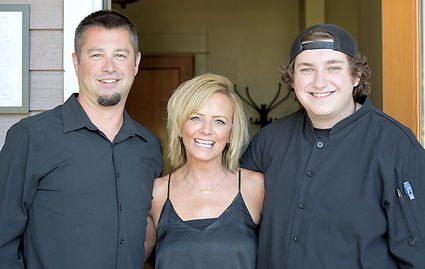 John's Grill is under new ownership and management since the start of the new year. Owner Chris Shirley, general manager Christine Robinson, and chef Tony Bongi are excited to be a part of the Mukilteo community.

The timing was perfect.

Late last year John and Lisa Alden, owners of John's Grill, decided it was time to retire so they could spend more time with family and travel the world.

But after 15 years in Mukilteo, the Aldens wanted to make sure that their restaurant ended up in the right hands.

Shirley was looking to expand his business and knew that longtime friend Christine Robinson had a desire to run a small, intimate restaurant.

"I happened to know that John's Grill had hit the market," Shirley said.

Shirley and the Aldens came to an agreement quickly, with the sale finalized in late January. Robinson took over as John's Grill new general manager.

"We worked hand in hand with John and Lisa for a couple of months, learning the recipes that John had created here," Shirley said. "We had an opportunity to understand the culture that they have created in here, the personality of the business."

It helped that Shirley and John Alden shared a similar professional background. Both worked for Daniel's Broiler and had a similar culinary background.

"Every kitchen has its own language, and a lot of us in the industry came through Daniel's Broiler or the Schwartz Brothers cooking tree," Shirley said. "So being able to speak that same language and have some commonalities was very helpful."

Most of the existing employees were retained, and many customers didn't realize that Shirley had taken over from the Aldens.

"Most people didn't know and that was really our goal – to make sure that all of their current clientele felt like it was exactly the same as when John and Lisa ran the place," Shirley said. "So it actually took a while for some people to figure it out."

As perfect as the timing was for the sale of John's Grill, the coronavirus pandemic and subsequent restrictions for restaurants definitely weren't what Shirley was expecting in the first few months of his ownership.

The loyalty of many of the restaurant's longtime customers helped Shirley weather the financial hardships. John's Grill offered takeout service and then with the shift to Phase 2 of the state's Safe Start reopening plan, the restaurant moved quickly with outdoor and indoor dining.

"The community support has been really wonderful here," Shirley said. "John and Lisa's regulars have continued to come in. They've really rallied to keep our doors open and help us out. So I've been feeling really, really fortunate to have the support from Mukilteo."

Indoor seating was reduced to allow for proper social distancing. The bar has yet to open per state guidelines.

John's Grill regulars have been enjoying all of their favorites – crab cakes, beef stroganoff, steaks, and seafood.

"We've kept the same menu. What we've done is we've listened to what people have wanted," Robinson said. "They wanted some more specials with a little more creativity. There are four to five items on our monthly specials. ... I'm getting people asking me what's going to be on next month."

Added Shirley, "While all of John's most popular dishes have stayed, we've been able to add a fresh twist and some new energy into the place."

Diners also might have noticed some new decor in the dining room.

Robinson knows some restaurant owners who have had to close their businesses due to pandemic.

Shirley is optimistic, given all of the challenges he and his employees have faced in 2020.

"The changeover with COVID coming into play has definitely not been beneficial," he said. "The support from the community has really made all the difference in the world. Christine's efforts, our team's efforts really in getting the word out and bringing in friends and family or letting people know that we are open have made a huge difference."

John's Grill is at 649 Fifth St., Suite 101. Check out the menu at https://www.johnsgrillmukilteo.com.