Whale likely dead after collision with ferry near Mukilteo 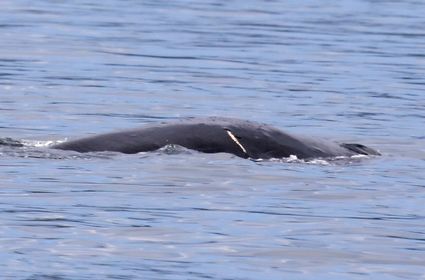 A gash can be seen on a humpback whale that collided with a Washington State ferry Monday, July 6, near Mukilteo.

A 3-year-old humpback whale is presumed dead following a collision with a Washington State ferry near Mukilteo Monday, July 6.

The accident occurred around noon when two humpback whales surfaced in front of the Tokitae as the vessel was approaching the Mukilteo terminal.

Bart Rulon, a naturalist and photographer with Puget Sound Express, a whale-watching company, witnessed the incident aboard the company's Saratoga boat.

"We had probably spotted the whales about 10 minutes earlier," Rulon said. "They went down on a longer dive south of Mukilteo. They were swimming right toward the ferry that was coming to the dock."

The 362-foot Tokitae appeared to strike the younger of the two whales, which sustained what are thought to be fatal injuries.

"One whale surfaced at the bow," Rulon said. "We all kind of cringed."

"They didn't realize what happened," Sterling said. "Our crew is really bummed out. They are whale lovers and nature lovers. ... Whales are near and dear to our hearts. We don't want to see that happen."

Sterling noted that this was only the second time in the 50-plus history of the ferry system that a vessel has struck a whale. A similar incident took place around about a year ago in Elliot Bay and also resulted in a fatality.

The injured whale eventually resurfaced and started acting in a sluggish manner, while the companion whale began trumpeting, which Rulon said often is a sign of aggression.

"The whale was struggling," Rulon said. "You could really tell it was having trouble. It raised its head, almost like it was in pain, and sunk back into the water. We never saw it after that."

The last sighting of the whale was 24 minutes after the collision.

The Saratoga stayed on the scene for about half an hour. A visible injury can be seen on the whale in some of Rulon's photos. A video posted by the Pacific Whale Watch Association (PWWA) showed the whale in apparent distress before going under the water.

"I've been doing this for 20 years. It's one of those things you don't expect to see," Rulon said.

The National Oceanic and Atmospheric Administration (NOAA) is conducting an investigation.

Kristin Wilkinson, regional stranding coordinator for NOAA Fisheries Protected Resource Division, confirmed to the PWWA that the whales were seen traveling together July 4-5 and, based on photographs of sightings, the juvenile did not have any injuries or abrasions before the ferry incident.

During an extensive search later in the day, the larger of the two whales was located near Whidbey Island's north bluff, but the younger whale, involved in the collision, was not seen.

"The PWWA is working closely with WSF, NOAA, and other members of the regional maritime community to provide our professional service, expertise, and invaluable sighting information to hopefully avoid tragedies such as this from happening in the future," PWWA communications director Balcomb-Bartok said.

The humpback whale population has increased significantly in the last 10 years.

Over the July 4 weekend, Puget Sound Express alerted recreational boaters about 15 times that whales were near their boats. Rulon said the Saratoga captain informed ferry personnel that whales were in the immediate area.

The ferry system has certain guidelines when whales are sighted. 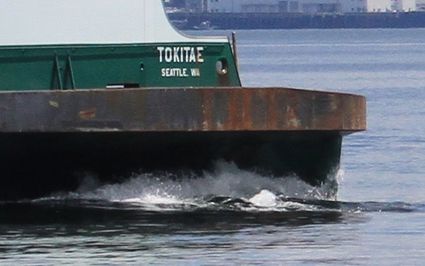 A Washington State ferry collides with a humpback whale.

"Our procedures if there is a whale is to slow down and to report the whale to the operations center and let other people know," Sterling said. "And if the whale is too close, we'll stop until it clears the area."

But he added "you can't stop a ferry on a dime, no matter how slow you are going. There's not a lot you can do."

Whales can be identified by looking at the underside and trailing edge of their tail flukes. Each one is unique, similar to a fingerprint.

Through detailed analysis of numerous photos, it was determined the deceased whale was named Chip and was born in 2017. He was named by one of the naturalists who discovered him.