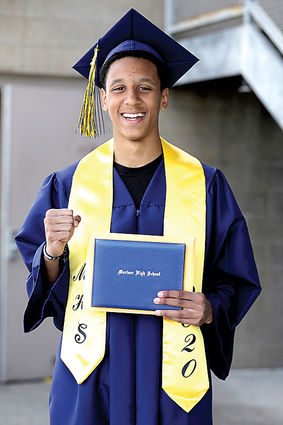 James Smith was looking forward to wrapping up his four-year athletic career at Mariner High School.

The senior standout had trained hard for the upcoming track and field season.

Then the coronavirus pandemic hit, causing the closure of schools throughout the state. Days turned into weeks and eventually the spring season was canceled.

Just like that Smith's high school athletic career was over.

"It felt like it was ripped away," he said.

What was not ripped away were the accomplishments of one of the Marauders' top athletes. Though he never had the opportunity to run a final race, Smith was awarded a varsity track and field letter.

That meant Smith finished with a total of 12 varsity letters at Mariner – four in cross country, four in swimming and four in track and field.

"I didn't know about that," Smith said of his remarkable accomplishment. "It was surprising."

"Sports definitely were important because I love being in shape," he said. "It gave me a lot to do. It helped me with my grades."

Smith said that he had added motivation to maintain a good GPA at school in order to compete in sports.

Coming into Mariner as a freshman, Smith was known as a runner. By the time he left, swimming had become his favorite sport, even though he never swam competitively prior to his arrival at Mariner.

Last Friday, Smith and many of his fellow seniors had an opportunity to step onto the Mariner campus one more time, as they donned their caps and gowns to pick up their diplomas.

Smith is hoping to join the Marine Corps and become a member of the Special Forces.

"I've had an interest in the military and in serving my country," Smith said.

Kenny Goodwin, a three-year returning member of the boys golf team, was poised for a breakout senior season. "He spent more time this offseason working on his game and was ready to be a force in our league," Mariner coach Dustin Weld said. "While disappointed that he could not play out his senior year, the passion and enjoyment that he developed for the game of golf will allow him to enjoy playing the sport for the rest of his life."

Trinity Hanning was a dedicated member of the girls golf team since her freshman season. 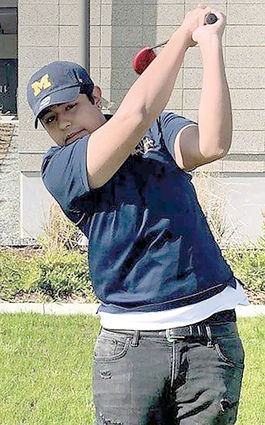 Mariner's Kenny Goodwin was poised for a breakout senior season for the boys golf team when the coronavirus pandemic shut down schools. What he missed the most was working with his teammates. "The highlight of my athletic career would have to be just being able to help others learn the game," Goodwin said.

"Trinity's positive attitude, willingness to learn and grow, and commitment to be at every practice and perform her best at every competition have made her a leader on our team," Mariner coach Jennifer Hampton said.

Hanning competed in the district tournament her sophomore and junior years.

"She is a role model for her fellow golfers," Hampton said. "She is not only a success on the golf course, but she excels academically."

Kelly Benish was the lone senior on the girls tennis team. This would have been her first year playing tennis since before middle school.

"If the season had gone through, she definitely was top 3 on the team, even with that huge gap of inactivity from the sport," Mariner coach Jonathan Abbaro said.

And coming off an appearance at state, the boys soccer team had high expectations for the season.

The Marauders would be anchored by Ebou Barrow, a first-team, all-league goalkeeper.

But Barrow and his teammates joined the rest of the spring's athletes on the sidelines.

"We had a great team this year," Barrow said. "I wanted to feel what it's like to win a championship."