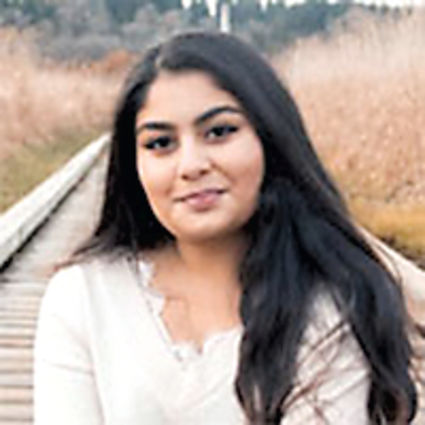 Kumar was one of six high school seniors from across the state to be awarded $1,500 scholarships by the Association of Washington Cities (AWC). The money was raised from city and community members during the AWC's Center for Quality Communities luncheon last year.

"I was pretty surprised," Kumar said. "I know there were a lot of strong candidates."

Mayor Jennifer Gregerson nominated Kumar for the scholarship. Kumar is only the second Kamiak student to receive the AWC honor.

"As a member of the City's Youth Advisory Committee, she worked on a mental health project, and was able to communicate her goals to the school district's council members, which helped create a pathway for students to talk about mental health in our community," Gregerson wrote about Kumar. "In preparation of that project, she also became QPR (Question, Persuade, Refer) certified, which is a method of suicide prevention used with people who are feeling depressed and hopeless."

Kumar has been accepted to John Hopkins University, where she is thinking about studying molecular and cellular biology with a possible goal of medical school.

The Kamiak senior works as a research intern at the Institute for Systems Biology in Seattle, assisting with genetic mapping and sequencing projects. Among her many school and community service projects, Kumar serves as co-chair of the Mukilteo Youth Advisory Committee, a team appointed and guided by the mayor to work on service projects and advise the City Council. After recently losing a childhood friend to suicide, she developed a mental health initiative at Kamiak to help destigmatize mental health struggles and create a community of students, parents, and others trained in suicide prevention.

Kumar also spearheaded Mukilteo Stands Behind You, a mental health event designed for youth and parents.

She also founded Amity Awareness, a high school club that raised funds for different causes, during her freshman year.

"I just have seen a lot of inequity in school and situations I've been in," Kumar said. "I wanted to do something to bridge the gap."

Kumar will officially graduate on June 19 and is scheduled to head to John Hopkins University for orientation on Aug. 21.