From the archives: 'Hype videos' to hanging with Russell Wilson 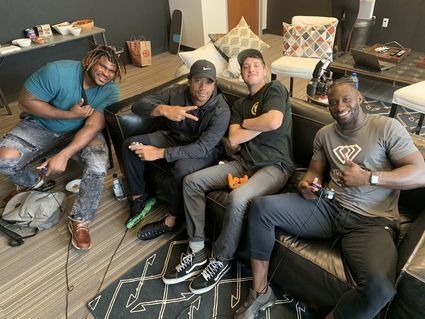 Kamiak grad Josh Cashman, second from the right, with Seahawks players D.J. Fluker, Russell Wilson, and Jaron Brown. Cashman made "hype videos" that got posted all over Twitter, and inevitably led to him playing Super Smash Bros. with Wilson, Fluker, and Brown Thursday, May 16.

Editor's note: Each weekend, the Mukilteo Beacon is republishing stories we think will be of interest to readers. Here's one on Josh Cashman, a Kamiak graduate who made waves in the Seattle sports world with "hype" videos. Former editor Brandon Gustafson talks with Cashman in a story originally published May 22, 2019.

If you're a fan of the Seattle Seahawks and have a Twitter account, it was hard to miss.

During the second half of Seattle's 2018 season, when the team caught fire and made the playoffs in a "rebuilding" year, the question on Twitter after the games weren't about the team's n...