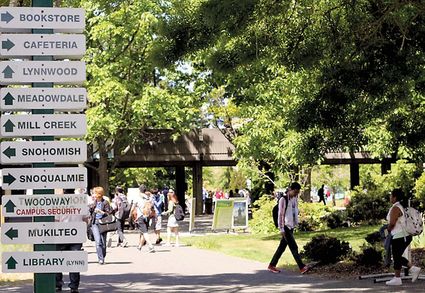 More than 50 years after its founding as Edmonds Community College, the two-year school now has a new name.

The Edmonds Community College board of trustees voted in favor of the change April 13.

During the trustees' March meeting, Danielle Carnes – the college's vice president for innovation and strategic partnership – presented a recommendation to change the college name to Edmonds College to more accurately reflect the fact that four-year bachelor of applied science degrees are offered, and to help with international enrollments.

"As Edmonds College, we remain committed to serving our community as an open-access institution, and that will stay central to our mission. We are also moving forward and continuing to innovate even during this time of turmoil in our local and global community," said Edmonds College President Amit B. Singh.

"Our new name reflects our comprehensive offerings – from pre-college to an increasing number of four-year bachelor of applied science degrees."

Edmonds College currently offers one bachelor of applied science degree in Child, Youth, and Family Studies, and will launch its second in Information Technology – Application Development this fall, and has more in development. Bachelor of applied science programs are approved and accredited by the Northwest Commission on Colleges and Universities.

The broader community should expect to see some changes associated with the college's new name.

In the coming weeks, there will be changes to the college website and social media pages. And over the coming months, the college will roll out an updated logo and new college signage.

Edmonds CC wouldn't be the first state college name to change its name. In 2009, Bellevue Community College dropped "community" from its title to become Bellevue College. The change was made, the college reported, because many associated a community college with two-year associate degrees only.

Among the other 34 Washington state community colleges that have dropped the "community" moniker are Cascadia College, Highline College, Pierce College Puyallup, and South Seattle College, among others.

Online classes only for spring quarter

Due to Gov. Jay Inslee's extension of the "Stay Home, Stay Healthy" order through May 4, Edmonds CC will extend its remote operations and will serve students and the community remotely through May 10. College offices will reopen to the public on Monday, May 11, pending further notice.

Social distancing guidelines will be followed.

Students should not come to campus. All services are available online and staff and faculty are available via email. Information on registration, advising, financial aid, updates and alerts, resources, and more can be found at edcc.edu/spring2020.

All updates regarding the college's response to COVID-19 are posted at edcc.edu/coronavirus.

The college eventually moved to its current location just east of Edmonds, in Lynwood on 68th Avenue West. The new location was the former home of the U.S. Army's Northwest Relay and Radio Receiving Station. A plaque at the northeast entrance to Alderwood Hall commemorates the former site of the Globe Wireless Radio Station.

When classes started in Lynnwood, there was one building: Mountlake Terrace Hall, built in 1970. There were two other small duplexes at the time, built in 1941, but those have since been torn down.

The college continues to expand.

A new student housing area is now being constructed across the street from Rainier Place. And scheduled to open in September is a new STEM and Nursing Building to be called Hazel Miller Hall in recognition of a $1.5 million gift from the Hazel Miller Foundation.

The late Hazel Miller was a philanthropist who lived in Edmonds.