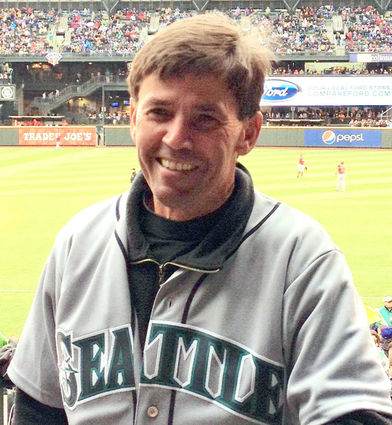 Howard Paul Benzel, 67, died unexpectedly on the afternoon of March 28, 2020. From the day he was born until the very end, there was hardly a moment to spare.

He was a dedicated husband, grandfather, and father of two, salesman (a good one), golfer, angler, questionable driver, handyman, jokester, and consummate host to family and friends. He died too soon in life and had so much more to accomplish.

As with most stoics with a strong work ethic, there were never enough hours in the day. But when the day would near its end – when he'd ask "What's your pleasure?" meaning it was time for a cocktail and to watch our beloved but beleaguered Mariners go down by four in the bottom of the third – he'd often toast you by saying, "Here's looking up your address." (Debate remains as to the exact meaning of this expression.) These moments were just as important as any of the many nagging chores that wouldn't fix themselves. There was always tomorrow.

Howard was born on April 26, 1952 in Walla Walla, Washington, and learned early on the value of long, tiresome days. He spent summers harvesting wheat fields inside noisy tractors and under hot sun – no earplugs and no sunscreen probably was the reason why his hearing was nearly shot and why oftentimes the back of his shoulders would look like burnt toast.

His refusal to take precautions to avoid unnecessary mishaps is a source of confusion to all that knew him. Call it stubbornness or, well, it was stubbornness. Whatever, that was Howard.

He graduated college at Central Washington University with a degree in Recreation, which perfectly prepared him for a long career in electrical distribution sales. And he was good at it, too, working his way through WESCO, bidding for the user call contract with Boeing and eventually opening his own distribution business.

His career of mostly independent work would wind down in 2014, but the busy days didn't stop. He maintained an active life even in retirement, managing rental properties, golfing, fishing, and finally getting to enjoy the often-neglected pleasures, in life like traveling and leisure reading.

He was known on the east side of the Cascades as Paul, and here on the west as Howard, but no matter the name, the characterizations were always the same: dependable, funny, smart, honest, motivated – the list could go on.

He was a father involved in his kids' lives, a caring son, father-in-law, brother, uncle, a loving and dedicated husband and playful grandfather, who could even exhaust an energetic six-year-old with wrestling bouts on the couch. His absence has been felt far and wide.

His friendships, both personal and business, span coast to coast. One thing's for certain, the work doesn't stop – not until the sun sets beyond the Olympics. What's your pleasure, old man? We'll bring the Crown Royal this time.

A celebration of his awesome life will be announced when friends and family can come together in an area less than six feet apart.