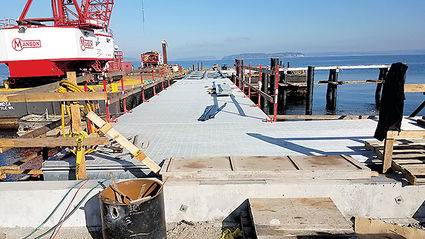 Marine crews are working on a new fishing pier that will open with the new ferry terminal this fall. Deck grating was recently installed.

Work continues on the new Mukilteo ferry terminal, and the projected completion date remains the fall of 2020.

"We haven't had any slowdowns because of the coronavirus yet," Washington State Ferries Public Information Officer Diane Rhodes said. "We're doing our best to keep people safe."

In response to the coronavirus pandemic, crews have increased safety procedures to help keep workers safe. Meetings are limited to small groups to allow for distancing, workers are told to stay home if they feel sick, and sanitation procedures have been stepped up inside construction trailers.

The upland portion of the project, which includes passenger and maintenance buildings, holding lanes and a toll plaza, is about 65% completed. The marine portion, which includes the vehicle transfer span and the overhead pedestrian walkway, is about 35% done. The project was split into two parts – upland and marine.

For the next few months, construction crews will be focused on land aspects of the project with work on the in-water elements, such as the installation of the vehicle transfer span, set to resume in the summer.

The contractor handling the marine portion of the project is on schedule with its work. Certain in-water welding could only be completed during extremely low tides in December, January and half of February. In-water work wrapped up last month so as to not conflict with the fish migration window from mid-February through July.

"They've done all the work they can," Rhodes said. "They will come back in August. They can't work in the water right now."

Rhodes said the project target completion date is October 2020, but added the date might change if construction issues arise.

The Mukilteo-Clinton ferry is one of the state's busiest routes, with more than 4 million total riders every year. Walk-on ridership during the peak afternoon commute is expected to increase 124 percent by 2040.

The Mukilteo-Clinton ferry is the state's busiest route in terms of vehicles. In 2017, the route had 2.21 million vehicles, and that number is expected to grow to 2.64 million by 2040.

The new terminal is located one-third of a mile east of the current terminal, which is at the intersection of State Route 525 and First Street.

Drivers will travel down SR 525 and turn right onto a new First Street that leads to seven holding lanes that can accommodate 245 vehicles, enough to fill a boat and a half. Current lanes hold 216 cars.

It's expected that the new location will reduce backups along SR 525 and take ferry traffic off Front Street. Cyclists will have their own dedicated lane and priority boarding.

The Mukilteo ferry terminal was built in 1957 and has not seen any significant improvements since the early 1980s. The new terminal building will be LED Silver certified, a credit-based system that awards points based on compliance with different aspects of sustainability.

Environmental review for the project started in 2010, with public meetings and community outreach in 2012. Design started in 2014, and removal of the old U.S. Air Force fueling station and pier took place in 2015. Construction of the trestle and underground stormwater utilities started in 2017.

Total federal and state funding for the project is $187.3 million.