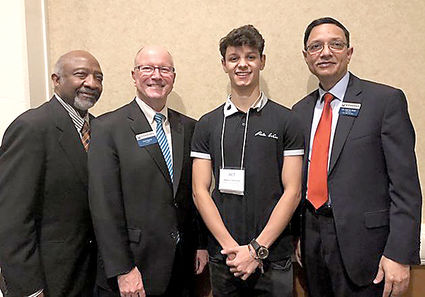 The Edmonds Community College Board of Trustees awarded Vinicius Armucho with its 2020 Transforming Lives award.

"Vinicius exemplifies the kind of student we hope to support and foster through an education at Edmonds CC, and is well-deserving of this honor and recognition," said Edmonds CC President Dr. Amit B. Singh.

The award is given annually to a student whose life was transformed by attending Edmonds CC and who also overcame significant barriers to achieve his or her educational goals.

"Where I came from, it is common for people not to finish high school, or even middle school, and to start working to help with household bills or to just give up," Armucho said. "They don't believe that they have the power or ability to change their lives.

"After I came to the United States and started college, my mother told me that most of my cousins now want to study English and come to the U.S. I affirmed to myself that when you see someone living the same reality as you, doing things that no one thought possible, it can inspire hope and motivation in others to achieve more."

Armucho came to the U.S. from São Paulo, Brazil to begin classes at Edmonds CC in April 2019. In just six months, he established himself as a leader among his peers and mentors on campus. He came to Edmonds CC with a passion for being part of the Triton soccer team and a drive to pursue his education –– what only seemed like a dream in Brazil.

Once at Edmonds CC, he sought out opportunities to challenge himself, including applying for and getting the position of Resident Assistant (RA) in the college's on-campus residence hall. He is working toward an Associate in Arts transfer degree with a focus in business.

"Vinicius is one of those students who brightens every room he steps into and adds value to our Housing department through his quiet confidence, hard work ethic, gentle guidance, and contagious kindness," said Housing RA coordinator Andrea Gabriel, one of two Edmonds CC employees who nominated Armucho.

"He undoubtedly changes the lives of every student he encounters whether it be through a welcoming smile, offering a helping hand, or being his most authentic self and empowering others to do the same."

Armucho was one of 34 Transforming Lives awardees from across the state. Each of Washington's 34 community and technical colleges' board of trustees selected an awardee from among its current and former student body.

The Washington State Association of College Trustees (ACT) then selected five awardees to serve as keynote speakers and share their stories at its Feb. 17 Transforming Lives Awards dinner in Olympia, Wash.