The Stanley Cup and the Spanish Flu 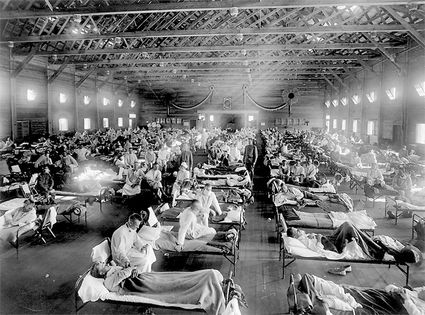 Soldiers from Fort Riley, Kansas, ill with Spanish flu at a hospital ward at Camp Funston.

The Stanley Cup still bears evidence of the Spanish flu, more than 100 years after the event.

A couple of years ago I asked my friend Billy Gleeson to take a picture of the Stanley Cup showing the Seattle Metropolitans as Stanley Cup champions. Billy then worked for NBC Sports, and is now production coordinator at "The Late Show with Steven Colbert."

I got a little more than I bargained for because the Seattle Metropolitan name is actually on the cup twice.

Seattle won the Stanley Cup in 1917. Seattle and Montreal are both on the cup for 1919. The reason is the Spanish flu. The Montreal tea...