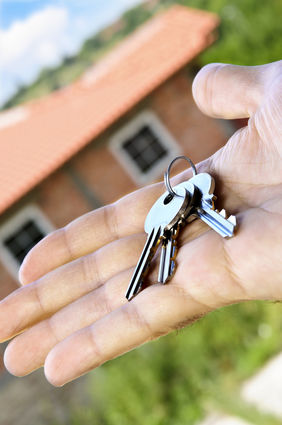 People who can't afford a mortgage have found a lifeline – and the keys to their own home – through Habitat for Humanity.

Michael Huff and Vickie Redding are the newest Habitat for Humanity homeowners in Snohomish County. They received the keys to their new home in Gold Bar in a public dedication ceremony on Feb. 29.

Built by Habitat for Humanity of Snohomish County, this home has been under construction by the nonprofit since December of 2018, marking the 28th that the nonprofit has built since its founding in 1991.

Michael and Vickie have dreamed of owning a home for over 20 years. But every time they began saving, a new financial obstacle came up, including a layoff from an employer's store closure, medical bills and caretaking for various family members.

They had to get by in a small two-bedroom apartment that was not well maintained by their landlord and is located in an increasingly unsafe neighborhood.

After years of applying to housing programs and watching their dream of homeownership fade, Michael and Vickie were selected to partner with Habitat for Humanity as homeowners.

"We just feel so happy," Redding said. "Now we can have our grandson to visit and it'll be safe for him. We'll have a yard for him to play in and everything. We're so excited to finally be able to afford a mortgage. Mike and I can't wait to move into our new home."

Volunteers from local businesses and organizations contributed thousands of hours to build the home, performing the vast majority of the labor. Teams of employees, sailors and parishioners from Boeing, Coastal Community Bank, ISEC, Naval Station Everett, St. Alban's Episcopal Church and Wells Fargo came out to the site to help on the house.

Every aspect of a Habitat home typically involves volunteer labor in some way, from foundation and excavation tasks to planting the last trees and shrubs.

A Veterans Build event was also hosted at the site, where veterans and veteran organizations came together to help build the home. Teams and representatives from AMVETS, Combat Veterans International, Team Rubicon and the Wounded Warriors Project assisted in construction.

Chris Anderson, Construction Manager at Habitat for Humanity of Snohomish County, said the support from the community was key to the project's success.

"We couldn't have done this without the support of our community partners," Anderson said. "We received so many in-kind donations of materials and professional and trade services.

"As always, most of the project was done by volunteers and professionals out of the goodness of their hearts. That's the Habitat for Humanity model, and that's how we can make the most affordable homes in an expensive area like the Puget Sound region."

Following the dedication, the Habitat for Humanity construction volunteers will continue to finish landscaping the property. The family is expected to move in to the house in March.

About Habitat for Humanity of Snohomish County

Habitat Snohomish builds homes in Snohomish County for low-income families who earn between 30 and 80 percent of the area median income.

Habitat harnesses the power of community involvement and volunteers to provide affordable mortgages and homeownership to disadvantaged families. To learn more, visit http://www.habitatsnohomish.org.