Senior standout battles through the consolation bracket in final tourney 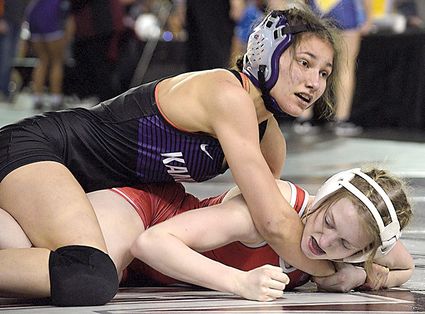 Kamiak's Diana Cantini (left) is in control of Castle Rock's Kylee Jacobs during a quarterfinal match at the State Girls Wrestling Championships Friday, Feb. 21, in the Tacoma Dome. Cantini won a 17-2 decision.

Diana Cantini faced one of the biggest challenges in her high school wrestling career.

The Kamiak senior came into Mat Classic XXXII undefeated and was regarded as a top contender in the girls 110-pound division.

But a 5-3 loss in overtime in the semifinals knocked Cantini out of the running for the state title. Instead of advancing to the finals for a second straight year, Cantini dropped down to the consolation bracket.

Cantini kept to herself on the floor after the disappointing loss.

"I just had to get my head right," said Cantini, who finished second at last year's state tournament.