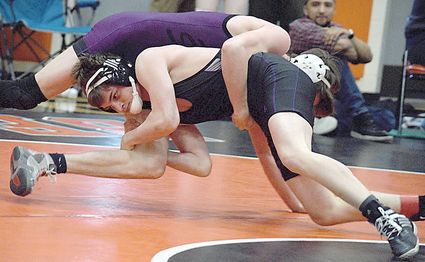 Kamiak's Odin Nieshe grabs a hold of the leg of Lake Stevens' Brayden Bowers during the 126-pound finals at the District 1 Sub-Regional tournament at Monroe High School.

Mariner and Kamiak each crowned a champion at the District 1 Sub-Regional wrestling tournaments.

Adee won by injury default in the finals over Mountain View's Joshua Troupe. The Mariner standout had a first-round bye and then won by technical fall (16-0) over Monroe's Jackson Dake. Adee then beat Monroe's Brian Zebley 13-4 in the semifinals.