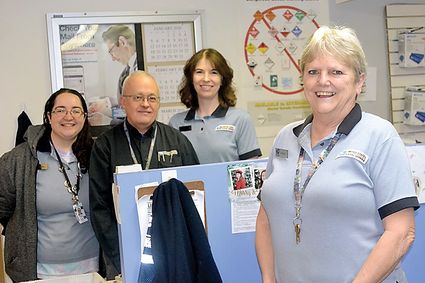 Karla Lawson, right, will miss her co-workers, but is ready to retire. Promising to continue providing the friendly service they're known for are, from left, Amber Harrison, postmaster Tim Laurence, and Karen Nicholson.

For many of us, going to the post office for stamps rates on a scale with a trip to the grocery store for milk. Rather not.

Yet, regulars at the Mukilteo post office actually enjoy their visit.

It's the people who serve them. Friendly, helpful and courteous, the Mukilteo team has earned a well-deserved reputation, including overwhelmingly positive Yelp reviews.

So it's with a little sadness that we report Karla Lawson, one of the most well-liked staffers, is calling it quits after a 30-year career with the U.S. Postal Service.

Having accumulated nearly a year's worth of sick leave over her three-decade stint, she officially will remain an employee until July, but Lawson wraps up her working life at the end of February.

And she has plans.

For instance, instead of trying to keep up with her gardening with six-hour marathons on Sundays – and the resulting soreness she'd incur for the rest of the week – she'll spread the work out to an hour or so a day and avoid the pain.

She and her husband Dave, who retired 1½ years ago after a 40-year career as a CNC machinist, also plan to hit the road. They like traveling to Mexico, and also have a vacation home on the shore at Riley Lake, in the foothills northeast of Arlington.

The couple also is active in the fraternal organization Sons of Norway – Dave is a trustee – so, Karla surmises, "I don't think I'll be bored at all."

A Kansas native until she turned 11, Karla moved with her family to Friday Harbor. That's where her postal career began, after a girlfriend alerted her to an opening at the post office.

In those days, the post office served as a kind of community center where neighbors met, sat on a bench and chewed the fat.

Over the years, Karla has seen her share of "interesting" mail. People mail odd-shaped items, like guitars, creepy crawly things, like worms and ladybugs, various fowl, including ducks, chickens and roosters, and yes, illegal items, like marijuana.

It's easy to detect by its strong odor, so if postal workers smell it, pot won't make it to its intended destination. Karla recalled one sender who thought it clever to put his return address down as 420 High Street (420 is counterculture slang for pot consumption around 4:20 p.m.).

Like much of modern life, the Internet has changed the post office's raison d'etre – when's the last time you received a personal letter in your mailbox? – but it has adapted and competes for package deliveries and similar demands.

Still, as always, service is the name of the game, and they provide it in spades at the Mukilteo post office.

Karla said they have regulars from Lynnwood, Everett and other surrounding communities, "because you guys are so much nicer," they tell her.

The other day, a recent Los Angeles transplant, used to brusque and indifferent service, asked, "How come you're so nice?"

Karla can relate. One of the advantages of working for the U.S. Postal Service is they permit transfers fairly easy with no loss of salary level. After Friday Harbor, she did stints in Leavenworth, Marysville, Everett and Lake Stevens. So she worked with her share of grumps over the years.

"There were days when I didn't want to go to work," she said. "All it takes is one person."

Then, 18 years ago, she transferred to Mukilteo, and found her home.

She'll miss her co-workers, her customers and the small-town vibe that still lives in Mukilteo.

But she won't miss that commute from her Lake Stevens home over the Highway 2 trestle.

And Christmas, when the spirit of the holiday can be, shall we say, hectic. "I will not miss Christmas," Karla said emphatically. "I might even smile next Christmas."

The community is invited to Karla's retirement party from 6-10 p.m. Saturday, Feb. 29, at the Sons of Norway Normanna Hall, 2725 Oakes Ave., Everett. The evening will include a DJ, karaoke and no host bar.