Knights appear to be on track for state title defense | Swimming

Kamiak's Vlad Gilszmer, seen here at the 4A state meet, is the defending 500-yard freestyle champion.

The Kamiak boys swim team viewed the Kentridge Invitational as a good test against some of the top teams in the state, including defending 3A state champion Bainbridge and 4A runner-up Curtis.

Vlad Gilszmer is pleased with the Knights' performance this season.

"Everybody is making a bunch of progress in the pool," he said. "I'm doing pretty good so far. I've had some of my best times this season."

The junior standout also took home a fourth-place state medal in the 200 freestyle.

Fang, who signed a letter of intent to swim for the University of British Columbia, recorded second-place finishes in the 200 freestyle and the 100 butterfly.

"I'm pretty confident we'll do well this season," said Fang, who took third in the 200 freestyle and fourth in the 100 freestyle at state.

The Kamiak senior was impressed by the University of British Columbia facilities and by his future teammates during a visit.

"The team was very committed and very positive, and they were very close," Fang said. "The pool was just amazing. It seemed like a perfect fit. It was a pretty easy choice."

Kirby's graduation means that Kamiak coach Chris Erickson is looking for a replacement for the 400 freestyle relay team. He has a number of candidates, with Brian Park and Ryan Fang as the two frontrunners. So far they are the only Knights with sub-50-second splits.

"But there's a whole bunch right behind them," he said. "There's six or eight."

Erickson is contemplating mixing up the relays at the district meet to see who elevates their performance.

"You get to put eight kids on the relay card and you can swim any of them," he said. "We can put different combinations in the prelims, in the finals and try to figure it out. ... Some of them will swim the 100 freestyle as an individual event. That will give us feedback too. I don't know when we're going to make that decision."

Erickson noted that Kirby has a 48-second split and he's looking for someone with a similar time. 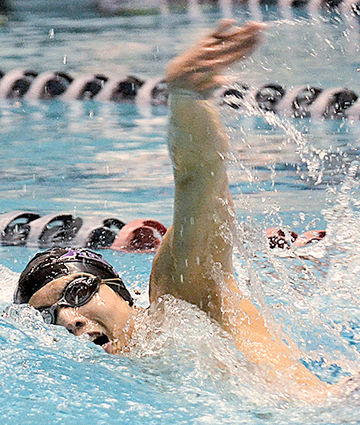 "We want a 48-second. We don't have that yet," Erickson said. "We might need it to win. That's the inspiration – to replace Alex from last year."

Curtis, who finished behind Kamiak, also has three of their four members of the 400 relay back.

The Knights were just a couple of seconds off the state record in last year's finals.

"The winner of that relay might beat the state record," Erickson said. "It may take a state record to win it."