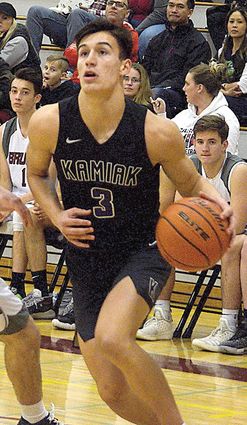 Kamiak's Brendan Beier drives to the basket against Cascade during a Wesco 4A game Friday, Jan. 3, at Cascade High School.

A busy schedule during the holiday break helped keep Kamiak sharp heading back into league play.

The Knights' defense clamped down Cascade from the tipoff, as Kamiak sprinted to a 19-6 lead after the first quarter and a 40-18 advantage at halftime.

The strong defensive effort faltered a little bit in the second half, but the Knights still cruised to a 63-44 victory over the Bruins in a Wesco 4A boys basketball game Friday, Jan. 3, at Cascade High School.

The Knights returned earlier in the week after playing three games at the Surf 'N Slam tournament Dec. 27-30 in San Diego. Kamiak went 1-2...