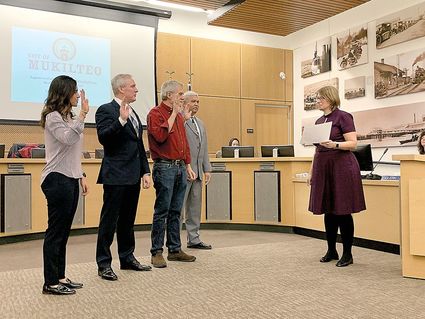 The start of a new decade brings a fresh set of eyes to Mukilteo City Council. Four councilmembers took their oath of office with Mayor Jennifer Gregerson Jan. 6.

Past Councilmembers Christine Cook, Scott Whelpley, and Steve Schmalz were replaced by a more diverse crowd of leaders at the first meeting of the year.

Elizabeth Crawford, Riaz Khan, Joe Marine, and Richard Emery were selected as the newly elected officials representing the City. Emery became the only returning member after defeating Whelpley in the general election Nov. 5.

Marine also returned to the council, but after a small...