Marauders hoping to build on successful start to the season | Wrestling 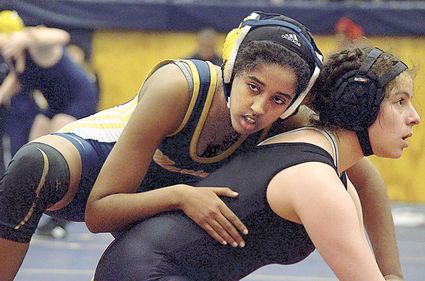 Mariner's Liyah Tesfay waits for the referee to blow his whistle during a 140-pound match against Cascade's Nadia Diaz-Luna at the Everett Lady Classic Saturday, Dec. 14, at Everett High School. Tesfay later went on to record a pin against Diaz-Luna, one of two she executed in the tournament.

The numbers for the Mariner boys wrestling team are down a little bit from last year, but coach Joe Barrington-Richards has been pleased by what he's seen on the mat.

"It's nice to see the high quality of wrestling so early on," said Barrington-Richards, who is in his first season as head coach after being promoted from assistant. "We still need our conditioning to come back to  us. ... I think we're on track to keep excelling and growing throughout the season."