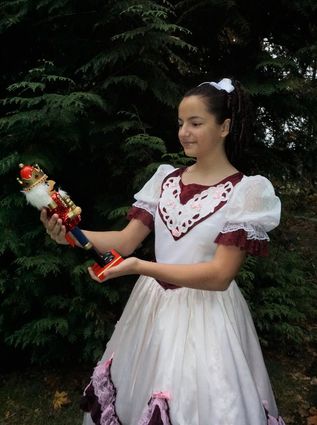 Eighth grader Kristina Balayants has been dancing in A Storybook Nutcracker since she was a little pig-tailed bon bon hiding under Mother Ginger's skirt seven years ago.

The Brier Terrace Middle School student is dancing the lead role of Clara this year in Alderwood Dance Spectrum's annual production. Balayants said she has enjoyed the challenge.

"There are more lifts. I'm learning different techniques," she said.

A Storybook Nutcracker is a shorter version of the Nutcracker. It uses brief narration to bring the Nutcracker story to life for younger audiences, according to a news release.

With more than 50 dancers, this production is fully staged with falling snow, colorful scenery, and fan-favorite songs and dances.

Audience members are greeted as guests and invited to the Stahlbaum family Christmas party. Following the performance, guests can meet the cast in character for photos.