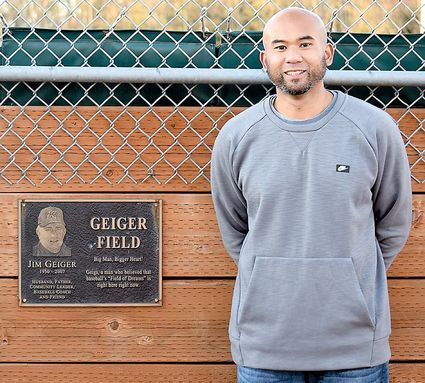 Clarence Trinidad, a 1996 Kamiak graduate, recently was named as the Knights' new head baseball coach. Trinidad stands beside a plaque that honors longtime assistant coach Jim Geiger, who was one of Trinidad's former coaches. The Kamiak baseball field is named in Geiger's honor.

Clarence Trinidad is excited to be back at Kamiak High School.

Trinidad, a 1996 alum, recently was hired as the Knights' new head baseball coach.

This will be the third time Trinidad has donned the purple and white uniform as a coach.

Trinidad was an assistant coach from 2008-2010 under Steve Merkley and then coached the junior varsity team in 2015 and was an assistant for Frank Nickerson in 2016. Trinidad takes over for former coach Kevin Agnew, who relocated to eastern Washington with his family.

"It's my home," Trinidad said of being back at his alma mater. "It's Kamiak. I graduated from...