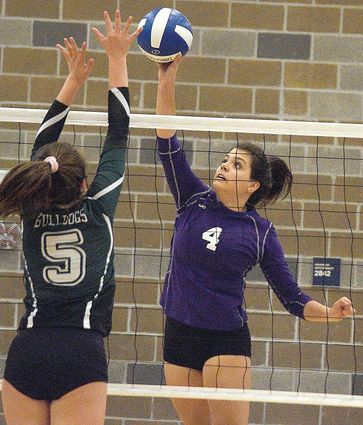 The Bulldogs, who later were eliminated from the postseason by Eastlake, jumped out to a 6-1 lead in the first set before the Knights regrouped. Kamiak eventually tied the score at 21, 22 and 23 before Mount Vernon prevailed.

Kamiak came into Tuesday's match missing one of its two setters, junior Camryn Woodworth, who was out sick. The Knights typically employ a two-setter offense.

"It affects you," Kamiak coach Jason Davis said of Woodworth's absence. "We're used to having two people running that."

Kamiak previously lost senior co-captain Sarah Brachvogel to an injury at a tournament in mid-September.

With only three other seniors, the Knights relied on their underclassmen this season.

"I saw a lot of resilience this year," Davis said. "I saw a lot of underclassmen stepping up and doing things, even though they weren't comfortable with that. They tried and they did their best. So I saw a lot of heart this year. I have to say it was really, really impressive."

Senior Carly Rupp, a senior transfer from King's, took over Brachvogel's role on the court.