Election season is gone, but not forgotten 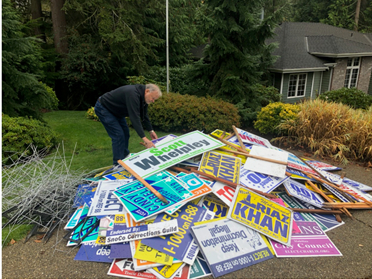 Volunteers collected winning and losing campaign signs in an effort to declutter streets after election results were first released Nov. 5.

The November elections are officially over and the ballots are counted. Some races were landslides and others maintained narrow margins.

On Tuesday night, after celebrating big wins, candidates Joe Marine, Richard Emery, and other supporters were busy picking up campaign signs until 2 a.m.

As the weekend neared, one volunteer noticed many other campaign signs still lining the Mukilteo Speedway and neighboring streets. Chuck Bernasconi, Marine, and additional helpers continued to remove all the remaining signs and clean them for recycling.