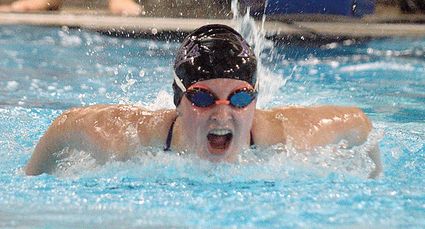 Kamiak's Annika Seaberg competes in the 100-yard butterfly during a Wesco 4A meet against Jackson Thursday, Oct. 24, at West Coast Aquatics in Mill Creek.

Kamiak senior Ellie Straume finished first in the 500-yard freestyle and helped the 200 medley relay team to a victory during a Wesco 4A dual meet with Jackson.

Straume easily won the 500 freestyle in 5 minutes, 9.43 seconds, about 10 seconds under the state time standard, Thursday, Oct. 24, at West Coast Aquatics in Mill Creek. Jackson's Parker Hoppe placed second in 5:38.54. Straume finished third in the event at last year's state championships with two seniors placing ahead of her.