Bulldogs dominate Marauders on both sides of ball | Football 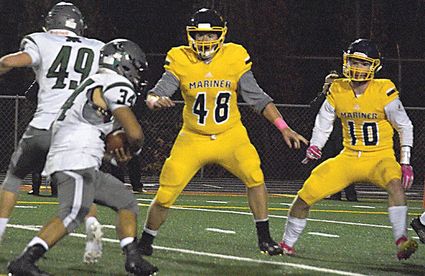 Mariner could not get the job done on either side of the ball.

The Marauders struggled to put up points on the scoreboard and the defense didn't have any answers for a balanced offensive attack by Mount Vernon.

As a result, the Bulldogs cruised to a 33-7 victory over Mariner in a Wesco 4A football game Friday, Oct. 11, at Goddard Stadium.

The loss dropped the Marauders (2-2 in the league, 2-4 overall) into a three-way tie for fourth place in the league with the Bulldogs (2-2, 3-3) and Cascade (2-2, 3-3). The top four teams advance to the district playoffs. Mariner and Cascade are scheduled to play on Friday, Oct. 25.

"They executed things better than we did. That's the bottom line," he said "They played a little more physical than we did."

The Bulldog ground game was led by junior running back Victor Martinez, who rushed for 57 yards on 12 carries with one touchdown. Mount Vernon finished with 145 yards on the ground.

"We needed to stay strong against the run," Stewart said. "We didn't get our guys ready to understand what they needed to do to stop the run. We had some breakdowns on defense."

Mariner avoided a shutout in the fourth quarter when junior quarterback Jackson Cole threw a 20-yard touchdown pass to senior Tyrell Waverly. The Marauders only generated 147 yards of total offense – 95 passing and 52 rushing. Cole was largely responsible for most of the yards on the ground. He ran 11 times for 43 yards.

"We didn't move the ball very well," Stewart said. "We need to do a better job of protecting the quarterback."

By the end of the game, the Marauder line was down players due to injuries.

"We had some new guys in there," Stewart said. "Our rhythm was thrown off. We also were missing a couple of running backs."

Mount Vernon took a 13-0 lead in the first quarter on an 11-yard TD run by Martinez and a 5-yard TD pass from Jensen to senior wide receiver Carlos Garcia.

Jensen added a 1-yard scoring run and then threw a 60-yard TD pass to Carter in the second quarter to extend the Bulldogs' advantage to 26-0. Junior Khen Pineda ran for a 2-yard touchdown in the third quarter.

"We have to start executing what we practice on defense," Stewart said. "Offensively, we have to do a better job with our blocking assignments. It's just execution across the board."