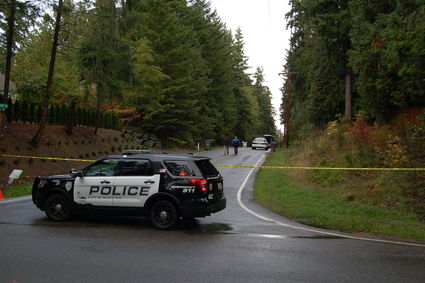 There was a large police presence on 92nd Street Southwest Tuesday morning after a man reportedly robbed at least one Mukilteo resident at gunpoint and shot at a passing car.

The suspect reportedly brandished a pistol at two residents who were walking on the street.

The Mukilteo Police Department reports that a witness drove by the scene and the suspect fired a shot at the vehicle before fleeing the area.

The suspect, who as of Tuesday afternoon is still at large, is described as a white male, roughly 5 feet, 9 inches tall, wearing a red hooded sweatshirt, blue sweatpants, and sunglasses. The suspect was not located, and Mukilteo Police were investigating multiple locations in town on Tuesday. The suspect was believed to be armed with a semi-automatic handgun, police say.

"It has been determined that the suspect has most likely fled the area," the department said in an update Tuesday afternoon. "There is no immediate concern for public safety. Continue to be vigilant and keep an eye out. Please call 911 with any additional information."