A first, a finale, and a semicentennial 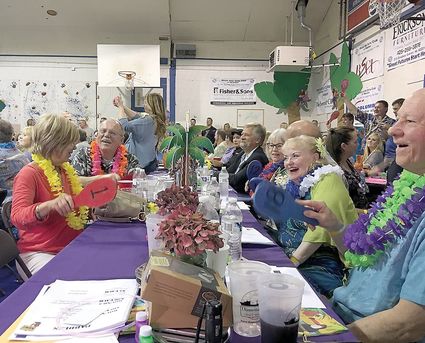 The annual Mukilteo Boys & Girls Club Luau returns this Saturday, Sept. 28. This will be the first Luau in the new facility (10600 47th Pl W), and is the 50th Luau overall. It is also one of Chuck Davis' last days as Club director.

The annual Mukilteo Boys & Girls Club Luau is back for the 50th time this Saturday.

As you can imagine, the yearly fundraiser has changed dramatically since the first party half a century ago.

While nearly every Luau was held at the old Boys & Girls Club on Second Street, this will be the first year the Luau takes place in the new Club in Harbour Pointe. It will also be one of the final days that Club director Chuck Davis is in charge of the facility.

Any time you're talking about the history of the Mukilteo Boys & Girls Club Luau, you need to go back to the beginning.

At the time of the first Luau, longtime Mukilteo resident Tim Taylor was 17 years old. He had gone to the Club growing up, back when it was the Mukilteo Boys Club, and Taylor's family ran the Taylor's Landing restaurant where Ivars currently is. His folks decided to start a fundraiser for the Club.

"I was 12 when I first joined the Boys Club, and later my parents decided they wanted to do something," Taylor said. "At the time, the Club was the only game in town. There wasn't a Lion's Club or a Kiwanis at the time. The Club was near and dear (to them), and all their friends had kids who also went to the Club."

Taylor said one of the bartenders at the family restaurant owned a pig farm, and his dad, Ed, bought a pig from him.

"After my dad bought this pig, it just kept getting bigger," he said. "(My parents and their friends) decided it'd be good to have a pig roast as a fundraiser for the Club."

"They put some knowledgeable people in charge of the cooking, but the problem was they liked to drink," Taylor said, laughing. "They had it on a rotisserie, but they got drunk and fell asleep and the coals went out. So they woke up and sped it up and they cooked the bejesus out of it."

Since then, the main course at all Luaus has been salmon.

"We know how to cook that," Taylor said, smiling.

During the first Luau, while his parents and others were having fun, Taylor was put to work.

"I was the one who had to do all the real work at the first one," he said. "I was setting up the tables and chairs and all that."

Since that first night 50 years ago, Taylor said the scope and intent of the Luau has changed.

"The original intent was to have a party while maybe raising some money for the Club," he said. "Now it's evolved to really more of a fundraiser. I mean, we used to have people just falling over after drinking. As kids, we went for the dancing afterwards. That changed when we hit 21."

The Taylor family will be back again this year, as Tim and the rest of the Taylor clan are helping sponsor the event, and will be cooking dinner for the more than 400 attendees.

As always, there will be plenty of items available to bid on during the live and silent auctions. Sports memorabilia, wine, food, and vacations are on the auction block this year.

The auction started a few years after the Luau started, and has grown tremendously since its inception.

Davis, a big sports fan, said one of his favorite auction memories comes from 2001. During that year, the Seattle Mariners won a record 116 games during the regular season. It was also Ichiro's first year in the MLB, and he won the American League Rookie of the Year Award, as well as the American League Most Valuable Player Award.

"That year, we had lots of Mariner autographs," Davis said. "We had a picture signed by the whole team, and the guy who got all the signatures had to talk Ichiro into signing it."

There are 44 tables at the Luau this year, including a few VIP tables. One of them will be auctioned off, Davis said.

Some of this year's auction items are a Gene Juarez spa package, two nights at Suncadia, dinner for six at Arnies, a Silverwood/Idaho Lakes vacation, roundtrip airfare for two on Alaska Airlines, a one-week vacation in Cabo, a signed Edgar Martinez baseball bat, a football helmet signed by Russell Wilson, and much more.

As we reported a few months ago, the Luau is a sort of send-off for Davis, who has led the Club for the last 46 years. His last day is Monday, Sept. 30.

When he first got on board, it was the Luau's fourth installment, and he's been organizing it since 1979.

"It's gotten more mellow since then, but people still have a good time," Davis said. "It's less about drinking and more about socializing."

The Luau is the Club's leading fundraiser, Davis said, and helps pay for operational costs and the Club's overall budget.

Davis said it will be nice to show off the building to those who helped chip in.

"It's nice to see people who've supported the Luau and the Club," he said. "It's one of the two or three events in town that people look forward to. This year especially; it's nice to be in the new building.

"People who've come before will see the difference, and we'll be able to showcase the Club to those who haven't seen it."

Davis said he expects to see some familiar faces he hasn't seen in a while as well.

"I know there's one coming up from California, one from Texas, one from Spokane, and a few people that haven't come to the Luau for many years."

With this being the first Luau in the new facility, there is more room than in years past. The tables will be round, rather than the traditional long tables, allowing for more face-to-face interaction than usual. Additionally, everyone will be able to remain indoors.

"Before, we had that big tent outside, so this year, let it rain," Davis said. 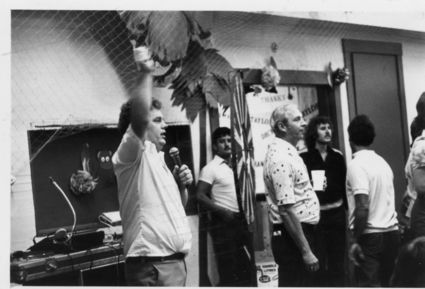 Chuck Davis, pictured here, is retiring after leading the Club for 46 years.

"I feel OK about it all," he said. "It's going to be a big change. There's just a lot that's passed me by, like technology. They should get someone younger in here for all that."

Davis said his understanding is the job has yet to be filled.

Taylor has known Davis for a long time, with the two meeting while attending school at Rosehill, where Davis' mother was a teacher.

"He was 'little Chuckie' then," Taylor said, laughing. "He was like 5 feet tall and weighed 80 pounds."

Taylor admires Davis' work with kids in the Mukilteo community.

"He's such a nice guy and he gets along great with the kids," he said. "He's just a great role model for them. He's not just a character, but he has good character."