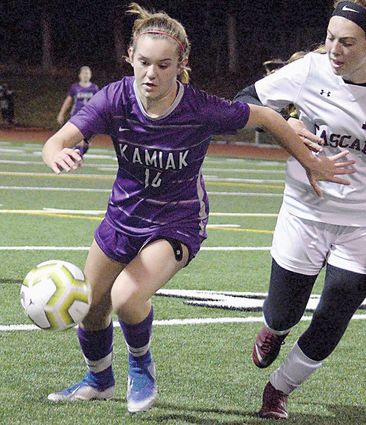 Kamiak's Cameron Bourne (14) tries to keep the ball away from Cascade's Ellie Smith during a Wesco 4A game Thursday, Oct. 10, at Kamiak High School.

A wild first half that saw Kamiak and Cascade combine for six goals – three apiece – tightened up considerably in the second half.

After taking a 4-3 lead, the Bruins appeared headed for victory before Kamiak junior midfielder Eva Alibejsi punched in her second goal of the game with about four minutes left in the second half to tie the score at 4 and send the game into overtime.

Despite some chances in the two five-minute overtime periods, Kamiak wasn't able to hit the back of the net again and had to settle for a 4-4 tie with Cascade in a Wesco 4A girls soccer clash Thursday, Oct. 10...