Mariner brings back its most experienced team in recent years 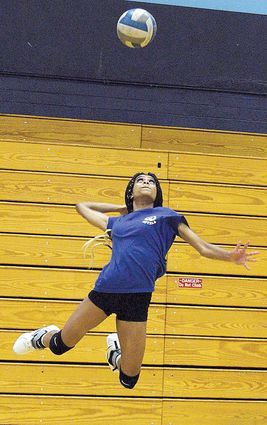 Mariner's Mary Seru keeps her eye on the ball as she serves during practice at Mariner High School.

The Mariner volleyball team is growing up.

The Marauders enter the season with an experienced roster composed entirely of juniors and seniors.

That experience is translating into better play on the court.

"We are more scrappy," Mariner coach Julia Riordan said. "It's been a lot of fun. The girls are hitting the floor, flying around out there. We've got some hitters this year."

Senior Taylor Rudberg is entering her fourth season as setter. She swung between junior varsity and varsity her freshman season.

"So far I'm seeing a lot of commitment from the girls," Rudberg said. "A lot of them are just putting in 100 percent, trying super hard and pushing themselves to be better every day. I'm also seeing a team that is very bonded. I think this is one of the best years we've seen with team bonding. We're all super close."

Riordan also is hoping that senior Sedona Hino will pick up some of the setting duties, freeing up Rudberg to join the offense.

"I'm excited for her (Hino) to step in and hopefully, we can see Taylor also hit as well in the games because she does have a great arm on her," Riordan said. "We do want her to be a part of that offense as a hitter as well."

Mariner's offense is shaping up well with senior Tina Duangmani, senior Gabby Jacobs, junior Emily Dang and junior Natalie Garcia, all of whom were on varsity last season.

The addition of juniors Joy Matthew and Araceli Urrutia, who are moving up from junior varsity, provides depth. The two swung up for a couple of matches last season.

Mariner will be relying on Duangmani and Jacobs in the middle.

"I think they are going to be really strong offensively for us," Riordan said. "They're fast. They are kind of our main defense. They put up a big block. I'm really excited to see Natalie and Joy on the outside. I think they work really well together. They talk to each other. They're letting each other know what's open. It's really fun to see them working together back there.

"We're starting to see maturity on the court. The team is gelling really well."

The Marauders have posted two league wins in each of the last three years – all against Cascade.

Riordan makes it clear that's she's not concerned about wins and losses but on Mariner's progress in matches and throughout the season. The Marauders showed that last season with competitive matches against Jackson and Glacier Peak, two teams that advanced to the district playoffs. Mariner won one set against each of those squads.

"We're starting to close that gap," Riordan said. "We're no longer trying to play catch up. Now we're competing with those teams. ... We look at how did we improve throughout the match?"

Senior Daejah Madewell said the goal is taking the growth and maturity seen at practices and transferring that to matches.

"A successful season is playing our best in practice and putting that on to the court with other teams and just showing that we can play how we practice," Madewell said.