Knights shut out by Braves | Football 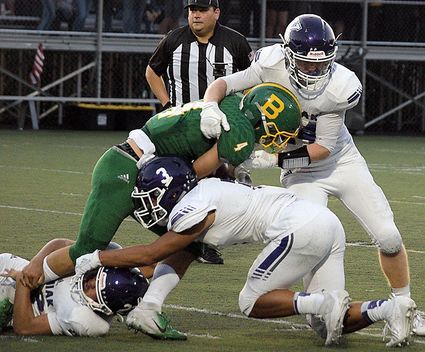 Kamiak battled to the end against Bishop Blanchet.

But the Braves' experience was too much to overcome as the Knights fell 42-0 in a nonconference football game Friday, Sept. 6, at Bishop Blanchet High School.

It's the execution that needs work.

"We've got to tackle better," Thomas said. "We've got to block better. We're missing protections that we shouldn't miss. The effort of the kids is great. We just want discipline. ... We're a young team. We're going to make mistakes. I know that. They know that. We've got to keep playing hard. If you play hard, you overcome those things as the season goes on and you get older."

Junior quarterback Nick Laman completed 13 of 27 passes for 100 yards with one interception.

"The biggest thing about Nick is he continued to compete," Thomas said.

The Knights got a glimpse of the future with the debut of freshman quarterback Ben'tre Worthy, who completed 5 of 7 passes for 31 yards with one interception.

"The kid stepped up and did a great job and he did it with no practices with the varsity," Thomas said. "He was pushed into emergency service as the backup quarterback. ... If I've got the freshman and he's suited up for the game, I told him I'm going to put you in. Let's see what you've got. I was really impressed with where he's at."

"The passing attack is in its infancy," Thomas said. "We've only been doing the offense for two and a half weeks. So there're going to be little mistakes here and there and nerves. It's the first game, the first time this quarterback has been in this situation and had to throw the ball. We're where we want to be. There weren't a lot of dropped balls, if any."

Up next for Kamiak is another nonconference game on the road against North Kitsap at 7 p.m., Friday, Sept. 13.