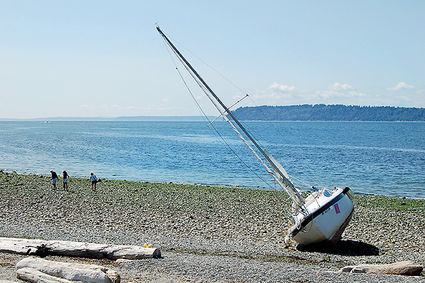 This sailboat was beached on the south end of Lighthouse Park for roughly three weeks. The boat was finally removed Aug. 26, after multiple calls, reports, and failed attempts at contacting the vessel's owner.

As most people in the area know, Lighthouse Park is one of the most desirable destinations in Mukilteo. That is especially true during the summer season.

In addition to Mukilteo's most visited park, the waters of Possession Sound are popular with boaters during summer months as well.

For a few weeks in August, the sandy and rocky shores of Mukilteo's waterfront had a not-so-welcome visitor in the form of a sailboat. This sailboat took up a bit of space in our paper over the last three issues of The Beacon in our Police Beat, as well as in this issue.

The Beacon received multiple emails a...