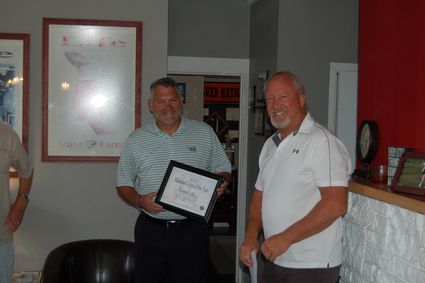 Matt Martin learns from Tim Taylor that he has been named the 2019 Mukilteo Citizen of the Year. Taylor and other past recipients surprised Martin at his office Tuesday, July 16.

When a handful of past Mukilteo Citizens of the Year walked in the doors of Matt Martin’s State Farm office last Tuesday, July 16, he was confused as to what was going on.

“I had no idea. I literally had no idea,” Martin said. “I was just clueless, like, what are they all doing here? What are all friends of mine doing at my work?”

By the time that group left his office, Martin had been welcomed into their ranks, as he was named the 2019 Mukilteo Citizen of the Year.

“It’s humbling, and it’s awesome,” Martin said on receiving the award. “I was brought up in a house where our parents taught us to give back.”

Martin, now 48, was born and raised in central Illinois, and ended up living in Oregon after graduating from Oregon State University. He was working with State Farm as “a corporate guy” for about eight years when he decided to shake things up.

“I took the plunge of starting my own agency,” he said.

When he was wrapping up his agency coursework, State Farm told him and his classmates that it had opportunities in Washington for agencies as far north as Blaine and as far south as Vancouver. Martin took a drive checking out different cities, and when he got into Mukilteo, he felt an instant connection. He moved into town in 1989.

“I looked everywhere and when I drove into Mukilteo, it felt right. I went to lunch and the people were super nice, and being in Mukilteo just felt right to me,” Martin said. “It felt like I could grow here and raise my family.”

When he arrived, Martin knew he wanted to get involved in the community. One of the first people he talked to was former Beacon Publishing sales representative Doug Kimball, who told Martin to talk to Frank Foster, who was, at the time, Kamiak High School’s athletic director. Soon enough, Martin was selling hot dogs at Kamiak football games and meeting more community members.

Martin has since built a large resume in volunteering and being a part of different local organizations. He is the president of the Mukilteo Chamber of Commerce, has sponsored and coached multiple youth sports teams, and has helped out both the Mukilteo YMCA and Boys & Girls Club.

He, along with Foster, founded the Mukilteo Lighthouse Festival Association after the City announced it couldn’t run the festival anymore.

He is also a board member of the Mukilteo Police Foundation, and helps annually with Chief For a Day, Shop With a Cop, and National Night Out. Through all of that, he has received other awards, in addition to his latest honor of Citizen of the Year.

“I don’t feel extraordinary,” he said, “it’s just what I do. It’s humbling to receive these recognitions. If I could leave and someone says ‘he was a great community member,’ then I did my job.”

Martin said he teared up when he read his nomination letter, which was penned by a few past Citizens of the Year, as well as another community member.

“I can’t think of a better example of a kind, caring, selfless person who is always willing to help others, loves his community and never asks for anything for himself,” the letter said. “He fits the profile of Citizen of the Year to a ‘T.’”

After receiving the award last Tuesday, the first person Martin contacted was his mother, who’d been told before he did that he was receiving the distinction. She joined him in having waterworks about the recognition.

“We lost my dad about four years ago, and she was in tears saying how proud he would be to see me receive this,” he said. “My dad always told me that if you help others with no expectation of being helped in return, your life will be rich with blessings.

“We were raised in an environment where community service was of utmost importance. This was more of a compliment to my mom and my dad.”

Even about a week after being surprised with the award, Martin is still in shock.

“It’s just such an elite club,” he said of all past Citizens of the Year. “I’m not sure if I deserve to be a part of it. I’m definitely humbled to be named a part of it.”

While there won’t be a Lighthouse Festival parade this year for Martin to be included in, like past Citizens of the Year have been, there is still a banquet in Martin’s honor this August.

“I’m really looking forward to that,” he said. “My mom’s going to come up for that, and it’ll be neat to again be there with that elite group.”

Most importantly for Martin, this award does not represent an ending in any way.

“I’m going to work to keep the legacy (of the award) alive, and keep things going,” he said. “I love the community, and that’s how we can help keep the community great, by volunteering when necessary. I feel like we, both Citizens of the Year and other volunteers, are doing our job. We’re trying to step up and make our community a better place.”