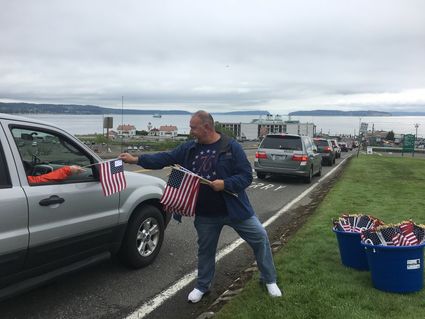 Patrick Hender handing out a flag to a passerby driving along the Mukilteo ferry line. Hender has handed out U.S. flags in the area for 20 years.

Since moving to the area from the East Coast 20 years ago, local Real Estate agent Patrick Hender has stood on the side of the street, a few days leading up to the Fourth of July, to hand out small U.S. flags for free to anyone willing to take one.

“It’s a great way to express your love for the country,” said Hender.

Ever since his move out West, Hender started the tradition of handing out flags the week of the Fourth of July, including here in Mukilteo.

Starting from Shoreline and making his way to Mukilteo, Hender typically hands out around 300 flags to the community.

However, to celebrate 20 years of his tradition, he put in a bigger effort this time around and handed out 1,000 flags.

Shoreline, Edmonds, Lynnwood, and Mukilteo are the cities he has traditionally visited to hand out flags, and he added Everett to his list recently as well.

Overall, Hender has handed out 5,000 flags since the start of his Independence Day tradition.

“I enjoy the flag, and the fact that when you give it to kids, they get to wave it around,” he said.

Hender has always loved celebrating the Fourth of July.

While living on the East Coast, Hender had the chance to witness the country’s first bicentennial in 1976, an event that really influenced his love for the holiday.

“It’s always been a big holiday for me,” Hender said. He continued to reminisce about the bicentennial.

“I just remember how great it was that everybody was just really celebrating,” he said.

Hender plans to hand out 1,000 flags next year as well.

Although he’s moved to different companies over the years as part of his job, he has always carried his tradition of handing out flags and hopes to continue handing out many more flags for the many years to come.