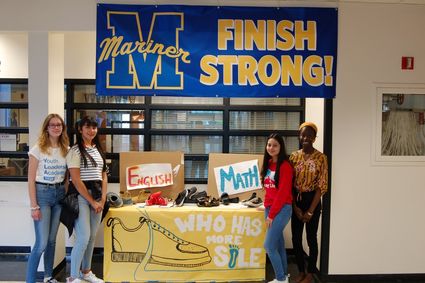 A few Mariner High School students took it upon themselves to make a positive impact in the world.

Those students  Amber Carbajal, Marlene Barajas-Salas, Angelina Allen, and Alberta Gbla  organized a shoe fundraiser, aptly named “Who’s Got More Sole?,” pitting the school’s math and English departments against each other to see who could donate the most shoes.

The fundraiser had a dual purpose, helping people locally, as well as nationally.

The fundraiser, which took place in early June, ended up collecting nearly 1,300 pairs of shoes, and many were donated to Angel Bins, which accepts new or gently used shows, and pays the fundraisers money for the shoes donated. Those shoes end up being sent to countries across the world.

The school kept some of the shoes, and the school did a shoe sale for students who need new pairs for everyday use, sports, or even job interviews.

According to Mariner math teacher Rhonda Marquardt, the group earned roughly $1,150 from the shoe sale, and expects to get about $800 from the Angel Bins donation.

So what is the end goal of the fundraiser? Where is the money going?

The goal is to build a library in Nicaragua, which costs roughly $5,000.

The four students learned about the nonprofit Water and Light International, which aims to assist Nicaraguans in Salinas Grande with creating a sustainable water solution. Marquardt actually visited the village, and wanted to connect her students with the students in Salinas Grande.

One of the things Marquardt learned about was the low literacy rate and limited access to reading materials and opportunities. Thus, her students created the goal of getting a library constructed.

“The summers there have really heavy rain,” Carbajal said, “so a library would really help protect what books they have. Right now, they’re just kept in bins. The library also wouldn’t just benefit the children, but the whole community as well.”

“It would be created so the community runs it,” Gbla said. “We want it to be a sustainable structure.”

Not only would it be sustainable in the sense that the community runs it, but another goal of the project is to be as eco-friendly as possible. The project will be built with Ecobricks, plastic bottles packed with plastic to a set density, which can be used as a reusable building block.

To make the fundraiser more interesting, the students decided to pit the math and English departments against each other. Students could donate shoes, and would get to choose which side the donations counted toward. The department that lost, which was math, had a teacher get a pie in the face from an English teacher.

Not too surprising, Marquardt got pied.

Gbla said the fundraiser showed how giving the Mariner community is. 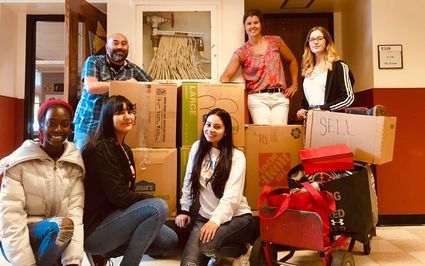 Amber Carbajal, Marlene Barajas-Salas, Angelina Allen, and Alberta Gbla, along with Rhonda Marquardt and Rob Storrs, with donated shoes for the Whos Got More Sole? fundraiser.

“This project shows that Mariner cares and will spend time helping the community.”

Marquardt is proud of the students for stepping up, and raved about their work on the fundraiser, as well as how they were all accepted into youth leadership groups on scholarships, and how three of them interned with Fred Hutch last summer.

“Oh, and they’re close to being 4.0 students,” Marquardt said, smiling.

For more information about the project, or to donate, visit waterandlight.international/projects.